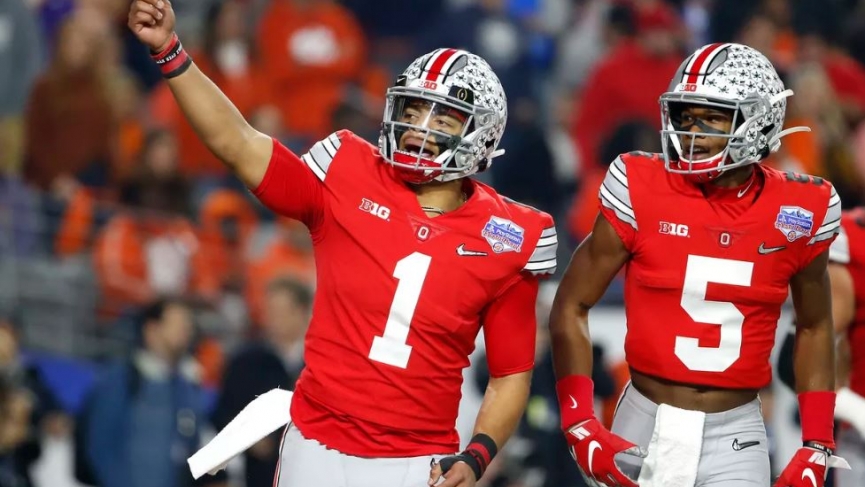 Ohio State vs Penn State Pick – College Football Week 9: It didn’t take long for the Big Ten to grab the spotlight with the marquee game of the week, and it’s not just because the clash between the Ohio State Buckeyes and Penn State Nittany Lions is the only matchup between ranked teams on the Week 9 NCAA football betting board.

ABC beams this one across the nation from Happy Valley, and DraftKings is carrying the Buckeyes as 11½-point favorites. Playing the scoreboard means a decision on a 64½-point total.

Ryan Day’s squad used a dominant second half to romp past Nebraska a week ago, 52-17. The No. 3 Buckeyes dominated just about every phase, committing just one turnover and three penalties while controlling the clock. Justin Fields enjoyed practically a perfect day, completing 20 of his 21 passes for 276 yards and a pair of scores while also rushing for another 54 yards and a touchdown.

About the only bad news to come out of the game concerns wide receiver Chris Olave. The junior caught six passes for 104 yards but came out late with a head injury and is questionable to face Penn State. It wasn’t nearly as enjoyable a season opener for James Franklin and the Nittany Lions, who tumbled 10 places to No. 18 after a 36-35 overtime loss at Indiana. Favored by 6½ on the college football odds, Penn State had a 28-20 lead before the Hoosiers knotted things in the closing seconds on a Michael Penix Jr. touchdown run followed by a 2-point conversion. Penix then converted another 2-point try in OT to halt a 6-game losing streak against the Nittany Lions.
Penn State’s injury list includes Noah Cain, the team’s second-leading rusher a season ago. Cain started at tailback but left early with a leg injury and is questionable for Saturday’s showdown. Also, linebacker Jesse Luketa remains out indefinitely due to a suspension.

Ohio State has won the last three to build a 20-14 advantage in the rivalry, but it’s Penn State capturing spread victories in the last four meetings. Two years ago at Beaver Stadium, the Buckeyes and Nittany Lions put on a great show as Ohio State rallied with two 4th-quarter touchdowns to pull off a 27-26 win as 2-point chalk. Four of the last five battles fell short of the scoreboard targets.

It should be a nice, chilly evening for football in University Park, mostly clear skies with the thermometer sitting in the low-40s at kickoff. The low-40s is also where I see Ohio State ending up on the scoreboard, and that should be plenty to cover in a 41-23 Buckeyes win.