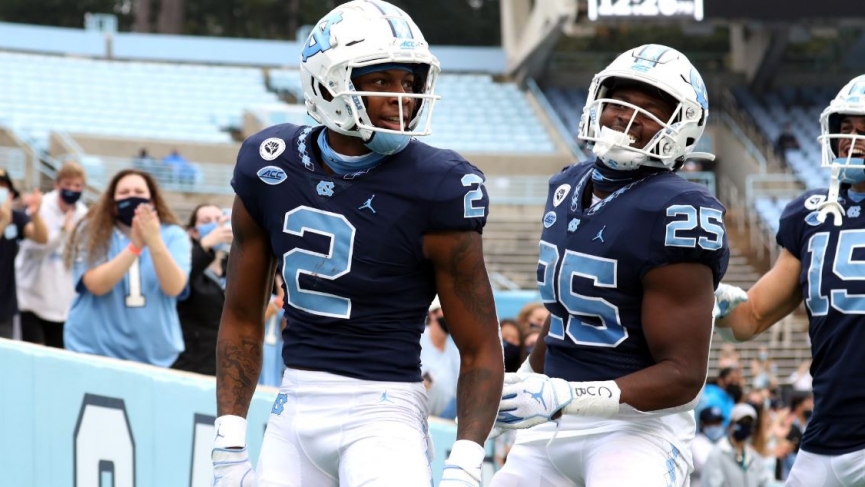 It’s often difficult at a basketball powerhouse such as North Carolina to get much ink on the gridiron. Mack Brown is trying to change that in Chapel Hill, and he has Tar Heels football relevant again in hopes of unseating Clemson in the Atlantic Coast Conference.

In order to have a chance at succeeding, North Carolina can’t afford any slipups like this week’s trip down to Tallahassee to take on the Florida State Seminoles. The 7:30 p.m. (ET) contest will be televised nationally by ABC, and a crowd of about 15,000 is expected to be on hand at Doak Campbell Stadium.

Often the underdog to the Seminoles even when they’re playing at home, the Tar Heels are solid road chalk this time around. In fact, the spread has been shooting up since it was first offered at 9½, FanDuel currently carrying UNC -13½. Saturday’s scoreboard target has also increased slightly to 63½, some shops listing 64.

We’ll have to see what effect the Big Ten and Pac-12 have on the rankings when they begin to play in the next few weeks, but North Carolina certainly has everyone’s attention right now at No. 5 in the AP, and No. 6 according to the coaches. College football futures pegged the Tar Heels fourth or fifth in the ACC, and the 3-0 start has seen them climb all the way up from 18/19 in the preseason rankings.

After trashing Syracuse in the season opener then struggling a bit at Boston College, UNC got involved in a shootout with Virginia Tech last weekend. Favored by 3½ at home, the Tar Heels built a huge first-half lead before holding on for a 56-45 win over the Hokies. The ground game did most of the heavy lifting with North Carolina coming up just shy of rushing for 400 yards, Michael Carter topping the 200-yard plateau on only 17 carries.

Defensively, the Tar Heels also struggled to stop Va Tech’s ground attack, and it is on the defense where North Carolina’s most significant injury concerns are. Tackle Raymond Vohasek is nursing a shoulder injury. A couple of DBs are listed with undisclosed maladies, Ja’Qurious Conley and Storm Duck. All three missed the game last week and are listed as questionable to face the Seminoles.

‘Noles Will Be Missing Leading WR

It just hasn’t been a very fun first season in Tallahassee for Mike Norvell. The Seminoles suffered a season-opening loss to Georgia Tech as double-digit home favorites, then got their backsides handed to them on the road at rival Miami. Florida State’s lone win came against FCS entry Jacksonville State, and the Seminoles failed to cover the NCAA football odds in that one.

Florida State did manage to get the cover last week at Notre Dame, even holding an early lead over the Fighting Irish. In the end, it was another loss, this time by a 42-26 count. It was also the same story on defense where the Seminoles allowed Notre Dame to roll up 554 yards, more than 350 of that on the ground.

Adding injury to insult, Florida State didn’t come out of the loss in good health. Sophomore quarterback Jordan Travis injured his hand late in the Notre Dame game, but is probable for this week. Travis will be without his favorite target, however, with Tamorrion Terry out for 2-3 weeks following minor surgery on a knee that has been bothering him all season.

Heels After 3rd-Straight In Rivalry

This is one of those conference rivalries we don’t see too often, with Saturday’s matchup just the third meeting since 2010. Florida State has ruled the series with North Carolina by winning 15 of the 19 matchups, plus the 10-10 deadlock in 1986. But it’s the Tar Heels who have current bragging rights, with dubyas in the last two meetings.
Those two wins took place in 2010 and 2016, each victory coming on the road in Tallahassee.  Both of those games were also played in Tallahassee, and both came with underdog North Carolina getting 10½ points. The 2010 clash skipped well past a 51-point total while the 2016 battle just stayed ‘under’ a 72½-point mark.

All signs point to a nice Saturday evening in Tallahassee, the skies mostly clear and much of the game played in the upper-60s. Speaking of the upper-60s, that’s where my crystal ball shows the final score ending, with most of those points on the UNC side of the scoreboard. My free college football pick is ‘over’ 63½.