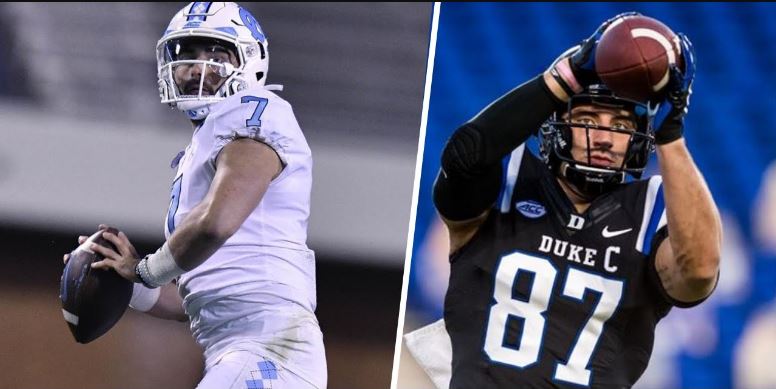 North Carolina vs Duke Pick – College Football Week 10: The Tar Heels sit as 11½-point chalk for this noon clash in Durham, ESPN2 handling the broadcast chores. That spread is up from UNC’s -9 opener, but the total has remained flat at 64.

Calm down, college basketball fans. I know you were robbed of March Madness and itching to see the Tar Heels and Blue Devils on the hardwood. That will happen soon enough, hopefully, but until then we’re left with North Carolina and Duke going against one another on the gridiron.

After sitting 3-0 and ranked No. 5 in the AP, North Carolina has fallen out of the polls by dropping two of three. The latest was a 44-41 setback at Virginia on Halloween evening with the Tar Heels favored by 7½. Two fumbles proved costly and came during a 28-0 run by the Cavaliers that bridged the two halves. Sam Howell completed more than 80% of his passes for 443 yards and four touchdowns, but the Heels never could establish a ground attack, and could not stop the Virginia running game.

Duke stumbled right out of the gate by dropping its first four games, but has since won two of three. The Blue Devils really inflated their offensive stats in the wins over Syracuse three weeks ago and Charlotte this past Saturday when they had just 51 plays from scrimmage and scored 53 points against an overmatched group of 49ers. Duke averaged 523 yards of offense in the two victories, around 350 in the five defeats.

Just as they do in the basketball rivalry, the Tar Heels lead the gridiron series with a 60-41 record, plus four ties. North Carolina won a close 20-17 decision last season in Chapel Hill, a field goal in the fourth quarter providing just enough margin to cover as 2½-point chalk on the NCAA football odds. Duke has won the last two meetings at Wallace Wade Stadium, and five of the last seven stopped short of the totals. Despite ranking last in the country with 23 turnovers, I’m still taking the Blue Devils and the points with my play.