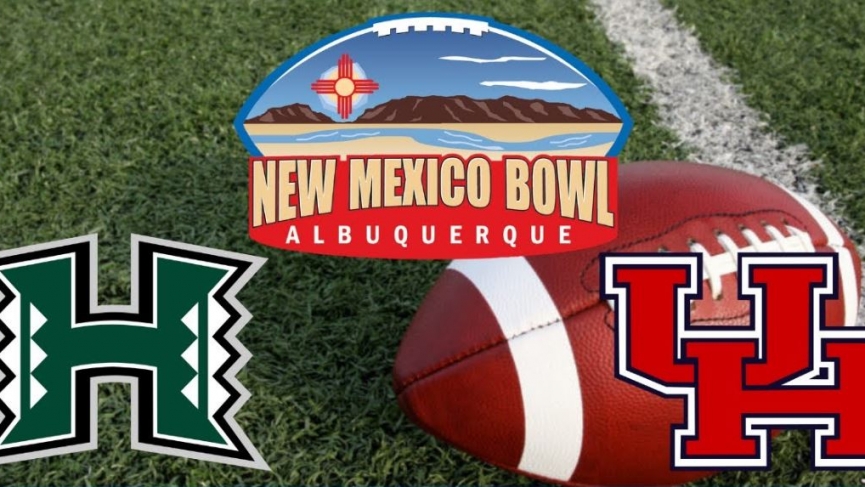 New Mexico Bowl | Hawaii vs Houston Pick: Dana Holgorsen is 2-5 in Bowl Games and on Christmas Eve afternoon, Holgorsen, and the Houston Cougars head to Frisco, Texas to take on the 4-4 Hawaii Rainbow Warriors in their final game of 2020.

Hawaii head coach Todd Graham is 5-4 in bowl games and has salvaged a .500 season in 2020. Meanwhile, Houston is 2-6 ATS in their last 8 games against teams in the Mountain West, and have fared very poorly in the month of December, going 0-4 ATS in their last 4 in the 12th month.

Hawaii is 3-2 ATS as an underdog this season, and managed to pick up two outright wins when getting the points. Hawaii upset Nevada 24-21 on November 28th as +210 moneyline underdogs, and started off their year with a 34-19 win over Fresno State as +120 dogs.

Houston is 3-1 ATS as a favorite in 2020, but finished off their season dropping a 30-27 game to Memphis as -245 chalk favorites. Beyond that loss, the Cougar’s other 3 losses came when lined as the underdog.

There’s no winning this season when betting on, or against, either of these two teams. Based on the measure of expectation, you have to give a slight edge to Houston, who have done fairly well in games they were supposed to win this year, with the exception of their most reason loss to Memphis.

In fifteen games this season, these two teams have an average combined total of 60.1 points per game. The betting total in this game opened at 61.5 but has since dropped to as low as 59.5. Hawaii and Houston have both been second half teams this season, putting up 15.8 (Hawaii) and 16.9 (Houston) points per second half respectively. It is difficult to get behind the Under at 59.5, especially considering this is a bowl game which may lead to one side being more motivated than the other to get points, especially if the game is a blowout.

With that in mind, the 1H Under at 30 (-115) via PointsBet may be the better way to go, as we’ve seen a number of bowl games historically start off slow, but getting over the total in the latter parts of the game. Neither of these teams are worth backing, but the value in this game seems to lay in live betting opportunities on the total, or a 1st half Under. Happy holidays, enjoy the games.