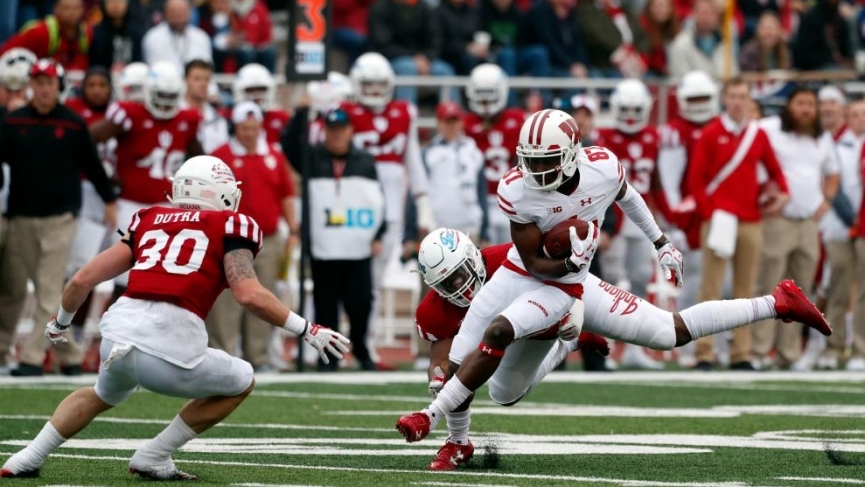 Indiana vs Wisconsin Pick – College Football Week 14: We’ve already seen a couple of Big Ten games called off this week because of the virus and all the protocols that go with it. Thankfully, we still have the only contest pitting top 25 teams on the Week 14 college football odds board, with the Indiana Hoosiers traveling to take on the Wisconsin Badgers.

The mid-afternoon kickoff will be carried by ABC from Madison where a pair of 1-loss squads play for the 62nd time. Partly cloudy skies will hang over a chilly Camp Randall Stadium, the boot coming with the thermometer just a few degrees above freezing. The 14-point spread Bet365 started with has held this week, while the total has dropped a point to 45.

Last week’s 27-11 win over Maryland was bittersweet for interim head coach Tom Allen and the Hoosiers. Michael Penix Jr. suffered a torn ACL late in the third quarter that will end his season, leaving Indiana to send Utah transfer Jack Tuttle out to finish the win and lead the team once again this week. Tuttle completed all five of his passes to help the Hoosiers to a couple of second-half touchdowns and gain their sixth cover in as many games this season.

Paul Chryst and the Badgers have only managed to play three games this year. They had to cancel contests against Nebraska and Purdue earlier because of COVID-19 issues in their own locker room, then saw last week’s matchup with Minnesota called off due to a virus outbreak for the Golden Gophers. Wisconsin was last on the gridiron before two weeks ago when Northwestern posted a 17-7 upset as a touchdown underdog.

Wisconsin owns a commanding 41-18 lead in the rivalry, with two more games ending in ties. The Badgers have won the last 10, covering nine of those matchups on chalk line spreads. The last five have resulted in lopsided outcomes, Wisconsin coming out on top by an average score of 60-12. You have to go back to 2001 to find Indiana’s last win in Madison, though it was a decisive 63-32 triumph.

The Badgers put points on the board in their two wins, but the offense was silenced against Northwestern. This is going to be a tough defense for Indiana’s Tuttle to make his first collegiate start against, and my NCAA football pick is on the ‘under’ in a low-scoring battle.