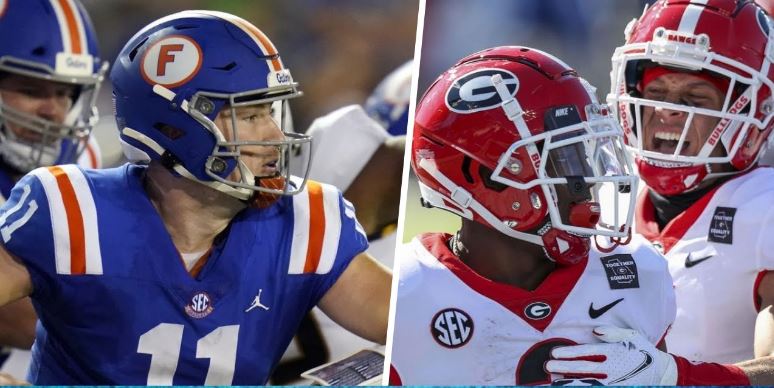 Florida vs Georgia Pick – College Football Week 10: A limited-capacity crowd will be at TIAA Bank Field in Jacksonville for the 76th consecutive annual meeting between Florida and Georgia, and 98th overall.

It was bound to happen, but it’s still sad to think there won’t be any tailgating at this year’s clash between Florida and Georgia. That officially has the World’s Largest Outdoor Cocktail Party on the wagon as another victim of the pandemic, though the good news is fans and college football bettors still get a top 10 collision between the Gators and Bulldogs.

Estimates are running in the 16,000-17,000 range for those lucky enough to attend Saturday afternoon’s tilt, the rest of us watching the action on CBS. FanDuel has the Bulldogs -3½ with 52½ for the total.

Considering his team had a 3-week layoff between games and was missing several key starters due to the virus outbreak, Florida’s Dan Mullen has to be pleased with the 41-17 result last week against Missouri. Favored by 13½ at home, the Gators enjoyed a relatively easy evening as Kyle Trask paced the offense with four TD passes. Most impressive was the defense that was without Marco Wilson, Shawn Davis and Donovan Stiner. All three defensive backs are questionable again for this week.

Kirby Smart and Georgia spent Halloween locked in a defensive scrum at Lexington, eventually coming away with a 14-3 win over Kentucky while favored by 17. You’d have almost thought it was an Army-Navy game as the two sides combined for just 222 yards through the air, and the final never threatened a 42-point total. The Bulldogs also have their share of starters who are banged up, the two biggest question marks found on defense where colossal nose tackle Jordan Davis (elbow) and safety Richard LeCounte (shoulder) are unlikely to play against Florida.

Mother Nature might have stopped a lot of tailgating this year anyway, the forecast calling for a 50%-60% chance of rain in Jacksonville on Saturday with an afternoon high of 80°. Georgia will be shooting for its 4th-straight win in the rivalry that has, for the most part, been defensive with seven of the last nine producing ‘under’ results. I’m playing the outright upset with Florida on the moneyline.