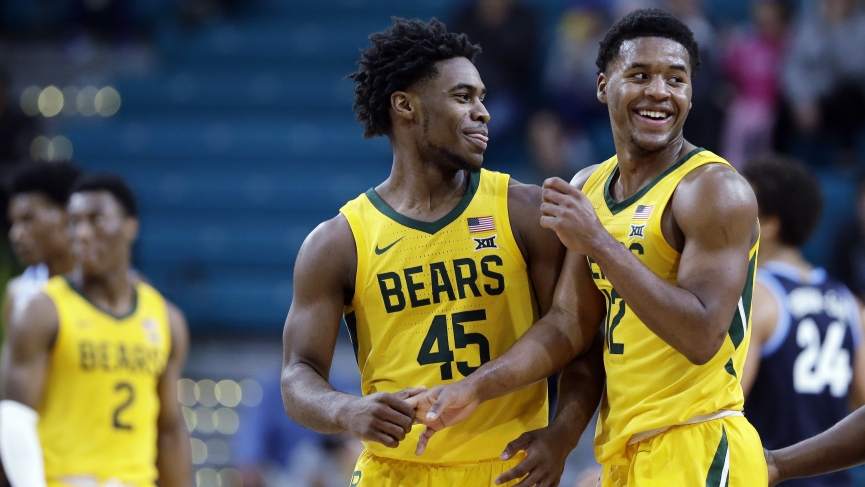 March Madness South Region Betting Handle Breakdown: Friday is the first full day of the NCAA March Madness Tournament. It has been a day sports fans have been waiting for in nearly two years, and it has finally arrived! Virginia Tech and Florida will kick off the tournament at 12:15 PM Eastern on Friday.

This week, we break down each first-round matchup’s betting handles and let you know what sides the pros and joes are taking. Here are the betting handle breakdowns of the south region.

Hartford comes into the tournament as a sacrificial lamb going up against Baylor. The Bears should have no issue taking care of Hartford, who had a nice run through the American East Conference. They’ll get their moment in the Round of 64, but that’s as far as it goes.

The betting handle and tickets are split fairly evenly for this matchup, which will make the spread an interesting thing to pay attention to. Tickets are split 50/50 for both sides, with Baylor receiving 52% of the money being wagered. 5,000 bets have been placed on this game as of writing.

Wisconsin and North Carolina are a matchup nightmare for both squads. The Tar Heels should have no issues winning the rebounding battle against Wisconsin, while the Badgers should control the game with their guard play. If Wisconsin can hit their shots, it could be a long night for UNC.

With a little under 7,000 tickets on the game, the bets are split 51/49 in favor of Wisconsin. However, North Carolina is receiving most of the money, with 59% of the dollars coming in on the Tar Heels. Sharps are still taking a position on Wisconsin even though the money is coming in on the other side.

Villanova limps into the tournament without star guard Collin Gillespie. His backup Justin Moore is also battling a severe ankle sprain and could be limited against a sneaky good Winthrop team. The Wildcats are definitely on upset alert, but this veteran squad led by Jay Wright will be no easy out.

Another game in the south where the bets are split evenly. 51% is going to Villanova, but 57% of the handle is on Winthrop for this matchup. Sharp money is also being reported on Villanova, and 10,400 bets have been placed on the game.

Purdue will take on North Texas in the first round of the NCAA Tournament. The Boilermakers will not need to travel far as they are the only team in the tournament that is from Indiana. The size of Purdue’s bigs could be a huge issue for North Texas.

Over 8,500 bets have been placed on this game, with 59% of them coming in on North Texas. However, big money is being thrown on the Purdue spread with 77% of the dollars wagered on the game. Despite the lopsided action, the line has dropped from Purdue -8 to -7.5.

Utah State and Texas Tech impose an intriguing first-round matchup this weekend. The Red Raiders struggled down the season’s stretch while the Aggies almost won the Mountain West Conference Tournament. Chris Beard will have his team ready to go, but Utah State will be a tough challenge for the reigning national runner-up.

Money is coming in on the underdog, with 61% of the handle going to Utah State. The 8,100 bets placed on the game are more evenly split, with 52% of them on the Aggies. No sharp or big money action has been spotted, and the line has dropped from Texas Tech -4.5 to -4.

One of the fastest-paced games of the tournament is happening first thing on Friday. In the second game of the day, Arkansas and Colgate will square off, and it will be a doozy. Colgate came out of the Patriot League 14-1 but will have to go up against a very good Arkansas team led by Eric Mussleman.

Over 11,300 bets have been made on the game, and it has been the most bet matchup of the first round. 52% of the tickets are in Arkansas, but the money is all over Colgate, with 79% of the handle on the dog. Sharps and big money are coming in on that side.

Florida and Virginia Tech will start the weekend off with a 12:15 PM Eastern tip. This is an interesting matchup as both teams have the ability to catch fire and give any team a run for their money. Unfortunately, the inconsistency has hurt both squads this season.

The betting numbers are completely lopsided for this game. 63% of the tickets are being punched on Florida, while Virginia Tech sees 72% of the betting handle. This is a typical pros vs. joes matchup as the sharps like the Hokies. Just under 5,000 bets have been placed on the game.

Ohio State and Oral Roberts should be a shootout with both having great offenses and subpar defenses. Three’s will come waves thanks to both team’s poor three-point defense. As long as shots are going, this will be a fun 2-seed vs. 15-seed matchup.

8,700 bets have been placed on the game, with 56% of the tickets coming in on the Buckeyes. However, Big money is being seen on Oral Roberts, with $8 of every $10 being wagered on the underdog. The line has dropped from Ohio State -17 to Ohio State -16.