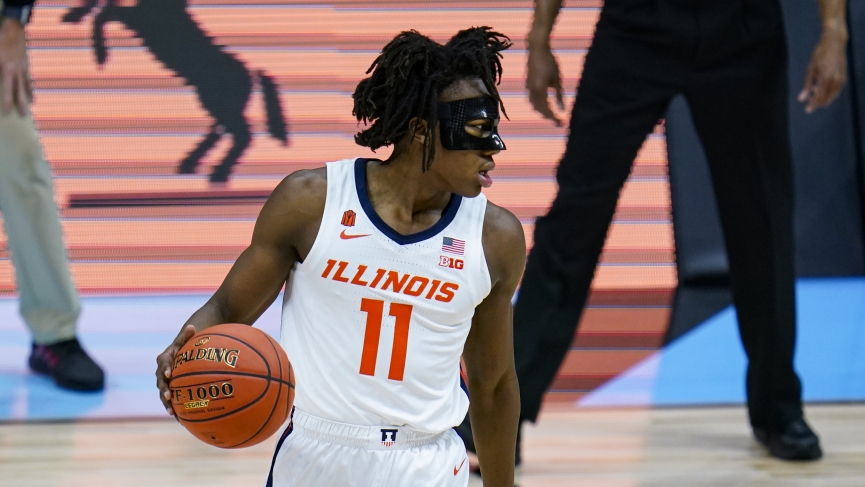 March Madness Midwest Region Betting Handle Breakdown: The midwest region will begin on Friday along with the south region in the NCAA March Madness tournament. This is the first time in the tournament’s history that each side of the bracket will play a full slate of games on the same day. This week, we break down every game in every region and take a deep dive into what the betting handle is shaping up to look like.

Illinois will take on Drexel in its opening-round matchup. The Fighting Illini are one of the hottest teams in college basketball and should handle Drexel with ease on Friday. Then, the state of Illinois will potentially see the matchup everyone is waiting for between them and Loyola Chicago.

Big money is coming in on the Illini, with 86% of the dollars being wagered on them. With over 7,200 bets already placed on the game, 54% of them are being placed on Drexel as the underdog. 22 points is a lot to cover, but anything is possible this time of year.

Loyola Chicago is taking on the ACC Champion in Georgia Tech. Fans of Loyola believe they should have been ranked higher, but they will have to prove that on Friday. Fortunately, they’ll be gifted with Moses Wright being out due to Covid-19.

Tennessee is in the dreaded 5/12 matchup against Oregon State. The Beavers went on a crazy run in the Pac 12 Tournament to get into the big dance. However, the Volunteers have one of the best defenses in the country and will be looking to end the Oregon State run.

Sharps disagree, though, with the pros taking on a position with Oregon State. 54% of the bets are coming in on the Beavers, but 68% of the money is on Tennessee. Already over 8,200 bets have been made on the matchup, and the line has stayed put at Tennessee -8.5 all week.

Oklahoma State is coming in as one of the hottest basketball teams in college basketball but has a tough matchup against Liberty in the first round. The Flames will be putting the Cowboys on upset alert despite Cade Cunningham playing his best basketball season.

With over 9,000 bets placed already, 55% of them are coming in on Oklahoma State. However, big money has been coming in for Liberty as 75% of the dollars wagered are on the Flames. This game could be a lot tighter than what people think, and the money would agree.

Another interesting first-round matchup will happen between San Diego State and Syracuse. By the metrics, San Diego State has played to a level that could get them to make a run. However, Syracuse is a team you can never count out due to their playing style.

As of writing, 53% of the bets are coming in on the Orange, while 62% of the money is coming in on the Aztecs. 5,500 bets have been placed on the game, but no sharp action has taken place. The line has jumped from San Diego State -2 to -3.

West Virginia limped their way into the postseason tournament but still managed to earn a three seed under Bob Huggins. They will take on Morehead State who could give them a tough challenge in the opening round. Morehead State managed to get through the Ohio Valley thanks to its solid defensive play.

The bets and the money are both coming in on West Virginia. No real action has been placed on the game, but 61% of the bets and 68% of the dollars wagered are on the Mountaineers on Friday. The line has moved up from West Virginia -12 to -13.

The first team to 60 wins. Clemson and Rutgers are going to a grind-it-out matchup, which is perfect to put at the end of the night and could put you to sleep with the tempo of this game will be played at. Both teams cooled off heading into the tournament this year, and it could be an early weekend for both squads.

This game is going to be another typical pros vs. joes matchup this weekend. Clemson is receiving over 70% of the bets for the game, while Rutgers sees a whopping 87% of the dollars coming to them. Sharp and big money is laying it with the Scarlett Knights in the 7/10 matchup.

Houston is coming into the NCAA Tournament red hot and should have no issues taking on Cleveland State in its opening-round matchup. The Cougars have arguably the most lethal defense in college basketball and will unleash it this Friday.

6,600 bets have been placed on the game so far, and the ticket count is close to even, with 52% of the wagers coming in on Cleveland State. However, big money is being placed on Houston, with the Cougars getting 78% of the dollars wagered. Bettors are scared to lay the 20-points with the two seed.