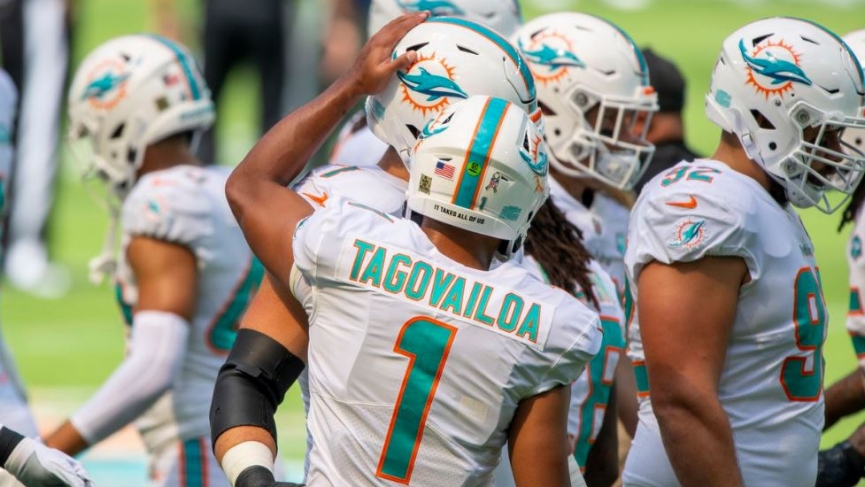 NFL Parlay Picks and Teasers – Week 10: We’re already past the half-way point of the 2020/21 season. Once again we’ve looked at every game on the board and we’re confident in our selections for both our two-team 6-point teaser and two-team money-line parlay in Week 10.

Denver Broncos from +5.5 to +11.5 at Las Vegas: This pick follows all of our basic rules, as we cross over several key-numbers, while we also don’t expect the Raiders to run up the score if they do in fact have a lead in the second half. Denver enters at 3-5, but it continues to play competitively despite several key injury issues. Last week it lost 34-27 at Atlanta, but it entered the fourth quarter down 27-6. This is the first of two games between the clubs, as they’ll round out the regular season at Denver on January 3rd.

In their last matchup, the Raiders won 16-15 back on December 29th, 2019. Las Vegas is 5-3, but with a game at home against the Kansas City Chiefs next weekend (a rematch after winning at Arrow Head earlier in the season), the Raiders are in jeopardy of getting caught looking ahead to that much more high-profile game. The Raiders were fortunate to get past the Chargers last weekend, needing a dropped pass in the end zone as time expired to secure the victory, 31-26. With an added six-points to its spread, we expect Denver to comfortably sneak in through the back door down the stretch in the first leg of our 6-point teaser.

Cincinnati Bengals from +7.5 to +13.5 at Pittsburgh: This line opened at +11.5 and it then dropped to +7.5 after the news that Steelers’ starting quarterback Ben Roethlisberger will be out with COVID-19 in Week 10 (and beyond?!) Pittsburgh barely got by the lowly Cowboys 24-19 last Sunday, and now it faces a red-hot Joe Burrow, who led the Bengals to a solid 31-20 upset win at home over the Titans last weekend. Roethlisberger isn’t the only one dealing with COVID-19 issues though, as offensive lineman Jerald Hawkins, running back Jaylen Samuels and linebacker Vince Williams are all out as well with the virus.

Joe Burrow would love nothing more than to be the first one to hand the Steelers a loss, and to do that in their own building would be doubly sweet. We won’t call for an outright upset, but with an added 6-points to their spread, we expect the Bengals to make the most of this situation and deliver the goods in the second leg of our teaser.

Remember, for our Week 10 parlay we’re throwing the spread out the window and playing both of these favorites on the money-line.

Tampa Bay Buccaneers (-280): The Bucs struggled in New York two weeks ago but gutted out the 25-23 road win over the Giants to move to 6-2. Tampa was set up nicely to avenge a Week 1 loss to New Orleans last weekend, but Tom Brady and the Bucs fell flat on their faces in the 38-3 setback. Tampa inexplicably lost 20-19 in Chicago in Week 5, before then bouncing back with a 38-10 win at home over Green Bay the following week. Brady and the Bucs have to be feeling confident that they can produce a similar effort this Sunday after the poor performance in Week 9, and against a team that they already beat earlier in the year.

Tom Brady had 217 yards, a touchdown, and an interception in his team’s 31-17 victory over Carolina while running back Leonard Fournette had 103 rushing yards and two major scores as well. Off a heart-wrenching 33-31 setback at Kansas City last weekend, the Panthers are now averaging only 23.3 points per game, while allowing 25.1. The Bucs average 27.7 and concede 26.6. Carolina running back Christian McCaffrey played in the first loss to Tampa, but he’s been hindered with injuries throughout the season and he’s once again listed as questionable for Week 10.

After last week’s dismal effort, we expect Brady and the Bucs to indeed bounce back with a solid “W” in Carolina on Sunday and to get the job done in the first part of our two-team Week 10 money-line parlay.

Miami Dolphins (-130): Your grandpa always told you to never stand in front of a train, and that’s the line of thinking here with this red-hot Dolphins team which has won four straight (and which has scored 129 points in that span!) Miami is 5-3 and LA is 2-6.

The Chargers fell 31-26 to the Raiders this past Sunday in heart-breaking fashion, as a pass was dropped in the end zone as time expired, which would have secured the outright victory. Rookie Quarterback Justin Herbert was a bright spot with 326 yards and two touchdowns. Herbert will be without his two top running backs in Austin Ekeler and Justin Jackson though in Week 10, both now on the injured list. While LA averages 25.6 points, it allows 27.0. The Dolphins on the other hand average 27.8 points per game, while conceding only 20.1.

Rookie quarterback Tua Tagovailoa has 248 yards and two touchdowns in his team’s 34-31 upset road win in Arizona last week. With a two-game road trip starting next week, we expect Tagovailoa and the surprising Dolphins to deliver at home in the second part of our money-line parlay.

Keep it locked to Odds.com for all of your NFL betting needs for Week 10. The best current odds can be found at our NFL Odds Page. Stay tuned for plenty more Weekly NFL Picks throughout the season.