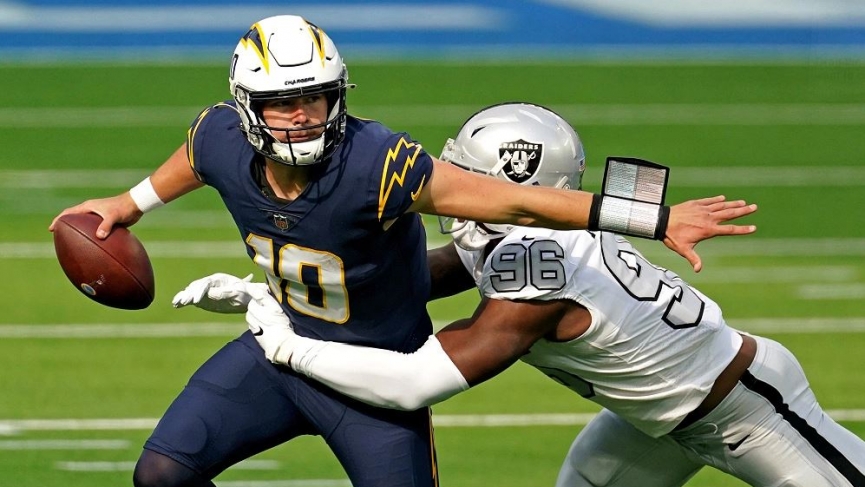 LA Chargers vs Las Vegas Raiders Pick – NFL Week 15: The Charges comes into Thursday night’s clash with the Raiders riding a 32-15-4 ATS streak in their last 51 games as the road underdog.

Last year the Las Vegas Raiders started the season 6-4 and went 1-5 down the stretch to finish 7-9. This year the Raiders started 6-3 but are 1-3 since with the only win coming on a last-second miraculous touchdown against the winless Jets. Last week the Raiders lost 44-27 to Indianapolis where they allowed Indianapolis to gain 456 yards of offense on 7.7 yards per play. As a result, they announced after the game that defensive coordinator Paul Gunther had been relieved of his duties and Rod Marinelli will take over.

Statistically, the Raiders defense has been a disaster all year. They rank in the bottom 10 in most stats including opponent yards per play and opponent yards per pass attempt. They can’t put pressure on the quarterback as evidenced by their 1.2 sacks per game which ranks 30th in the league. They are one of three teams allowing more than 30 points per game with their red-zone defense allowing touchdowns on 65.45% of red-zone trips which ranks 24th. It’s hard to predict any significant changes or improvement from an inept Raiders defense this week considering they have just 3 days to prepare for this game.

These two teams met back in week 9 when the Raiders hung on to win 31-26. It was a back and forth game with the Los Angeles Chargers marching down the field on a 15 play drive at the end of the game. On the final play, on 3rd and goal, the Chargers thought they had scored the winning touchdown until it was overturned on replay preserving the win for Las Vegas.

Outside of yards per play where Las Vegas averaged 0.5 yards more, Los Angeles dominated the box score with 10 more first downs, 120 more yards, 9 minutes more time of possessions and Los Angeles also ran 25 more plays. Los Angeles should also have the benefit of having starting running back Austin Ekeler for this contest as he missed the first meeting.

Chargers quarterback and rookie of the year front runner Justin Herbert had an easy time picking apart the Raiders defense in the first meeting completing 28/42 passes for 326 yards and 2 touchdowns repeatedly finding Keenan Allen who caught 9 passes for 103 yards.

The Raiders’ offense is slightly above average ranking 11th in yards per play and 9th in yards per pass attempt. The offense does one thing really well in converting 3rd downs at a 50% clip which is first in the NFL. They did score 31 points in the first meeting but this week’s task figures to be much tougher.

Defensively the Chargers will have the services of stud defensive end Joey Bosa and starting corner Chris Harris Jr. available as both players missed the first meeting with injuries. Last week the Chargers allowed 17 first-half points prior to pitching a shutout in the second half. They only forced one second-half punt but the defense was able to intercept the ball 3 times.

The first meeting between these two teams saw a down to the wire contest where the Chargers were missing three key players. Those players are now healthy and Las Vegas is playing its worst football of the season thus I could only take the Chargers’ +3.5.