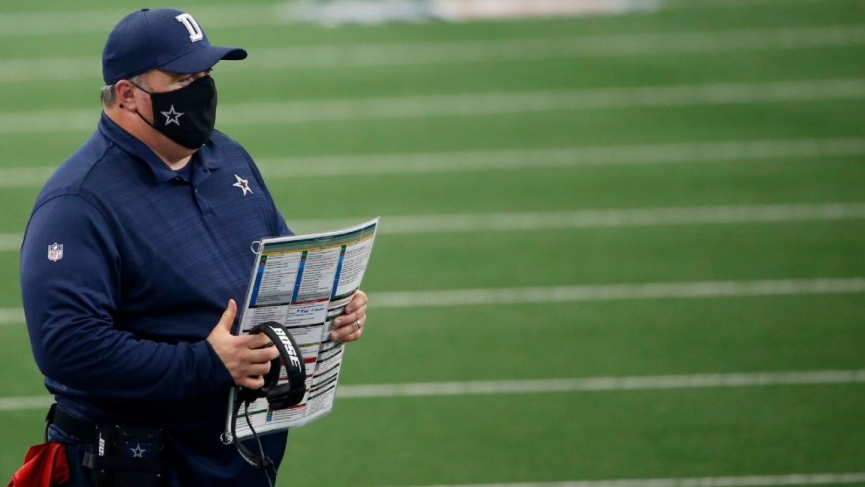 Dallas Cowboys vs Baltimore Ravens Odds – NFL Week 13: Mike McCarthy is 2-9 ATS as coach of the Dallas Cowboys, with the Cowboys failing to cover the spread by an average of -8.1 points per game in the 11 games played this season. They head to Baltimore to take on the Ravens and John Harbaugh, who are 5-14 ATS in their last 19 games as the home favorites, a trend that dates back to 2018.

WEEK 13 MATCH-UP
Dallas
Baltimore
Opening ATS Line
+7.5 (-110)
-7.5 (-110)
Total
Over 45.5 (-110)
Under 45.5 (-110)
Where/When
M&T Bank Stadium
Tue. Dec 8th, 8:05 PM ET
The Ravens pulled off a miraculous ATS cover over the Pittsburgh Steelers last week, with their 3rd string quarterback Trace McSorley coming in on relief of Robert Griffin III. McSorley had just 2 completions on 6 attempts at the end of the game vs the Steelers but still managed to put up 77 yards passing and a touchdown, pulling the Ravens within the 10.5 point spread. The Ravens will hope to build off that momentum generated in the spirited loss to the Steelers. However, Baltimore has failed to cover the spread in back to back games in 4 of their last 5 attempts and to make matters worse, the Ravens are 0-4 ATS in their last four games as the betting favorite.

The Ravens have had a poor season based on their expectations in 2020, going just 3-5-1 ATS as the betting favorite. Baltimore has outright losses in their last 3 games, and although they were heavy underdogs against the Steelers last week, they were strong favorites in games they lost to both the Titans (+210) and the Patriots (+250) in the weeks prior.

The Cowboys have gone 2-2 ATS as an underdog in 2020 and are an abysmal 2-9 ATS overall this season. The Cowboy’s most impressive victory came two weeks ago against the Minnesota Vikings, winning 31-28 as +255 moneyline underdogs. However, the Cowboys followed that performance up with a terrible performance at home on thanksgiving against Washington, giving up 41 points, the most they’ve allowed all season.

While both teams have fared much worse than what their expectations were coming into the season, you have to give the slight edge to the Ravens as home favorites in this match-up. Baltimore will have Lamar Jackson back behind center, which will obviously be a big boost for a team that struggled last week with a 2nd and 3rd string QB. The Ravens are the 2nd best team in the league rushing the ball, putting up 157.6 yards per game on the ground, while the Cowboys give up the most rushing yards in the NFL per game at 156.4, that will ultimately be a huge favorite in the Ravens ability to put up, and hold margin against the Cowboys on Tuesday night.

The Cowboys have some inflated offensive numbers, which may be why this total has moved from 45 up to 45.5. Dallas has failed to put up more than 20 points in 5 of their last 6 games, with the only outlier being the 31-28 upset victory over the Vikings in week 11. If you remove that game from the stat sheet, the Cowboys have averaged 11 points per game going back to October 19th. This game is likely to be a snoozer and it wouldn’t be a surprise to see both the first half and full game go under the betting total.