Expect an outburst of runs when you get two of the highest FB: GB pitchers in the game. Robbie Ray and Jon Gray have issues keeping the ball in play, this bodes well for over backers here. If for some reason the starters do not get touched, just wait for the relief pitchers who are averaging over five FIP’s. Let’s continue to stay hot and ride the Full Game Over 9 -125.

Jon Gray has a very small sample size when faced on the road,  though you can date back to when he first came in the league his road starts were always shaky. Gray walks much more batters on the road than at home, and without missing a beat Gray is already at a 2.45 WHIP. Somehow Gray did not allow a home run in his only game on the road, do not expect this to last when you have a GB/FB ratio of 0.28 and a hard contact over 40 percent. Im not sure how Gray will be able to stop this DBacks squad who are starting to hit the ball again, not to mention they are 100 percent healthy at the plate.

Robbie Ray can not keep the ball in the park, if you thought Gray had a bad GB/FB ratio, Ray just said hold my beer with a 0.11. Again similar to Gray, his hard contact is even higher at 48 percent, this is a red flag for Ray, Colorado is tops in the league when it comes to hitting fly balls. Yes, Ray has an average WHIP and great batting average, but he is still allowing runs due to his extremely high fly ball rate. When playing in Arizona there is a heat factor that you always have to account for, especially when the dome is open. This only helps our chances of cashing that over ticket. 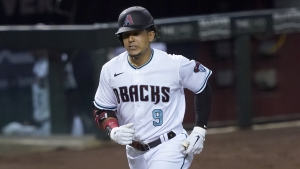 Colorado has garnished some of their early hitting once again, our table above will show you since August 9th till present.. I want to dive right into their efficient hitting, wOBA and BABIP are one of the more telling stats, it allows you can gauge how well a team is batting in clutch situations. You want a team hitting over 0.300 in both of those categories, we can check both teams off. Keep an eye out for Trevor Story for the Rockies, he’s hitting nearly 0.300 on the year, and is on a five-game hit streak with back to back home runs in his past two games.

Arizona show very similar signs to what the Rockies have done at the plate. Just like when Ray told Gray to hold his beer with his 0.11 GB: FB ratio, the DBacks have topped the Rockies’ impressive offensive output. One thing you will want to take note of is how hard to DBacks are hitting the ball. In over 15 games in August, these stats above are telling you Arizona are in a nice groove offensively. A complete healthy lineup, I see no reason why the DBacks and Rockies do not get to both these suspect starting pitchers.

If you haven’t caught wind how bad both bullpens have been in August, look no further. Our table above breaks down the mediocrity and distrust these two bullpens show on a consistent basis. Colorado takes the cake here for the worst bullpen, it’s their 57 percent LOB rate, you are basically letting the opposing team walk home at the rate. I would be outraged if I was a pitching coach for either squad. If it ain’t broke don’t fix it. Let’s fade these weak bullpens, and trust our hot bats. Full game over 9 -125 will be our BEST BET on today’s card.