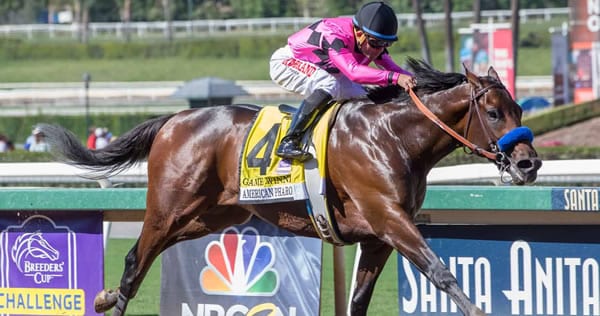 Yesterday was statement Saturday where multiple horses provided impressive performances. Vekoma and Volatile both dazzled in sprint stakes at Belmont and Churchill Downs respectively. Four Graces set a strong pace and turned away the favorite in the Dogwood and is now 3 for 3 sprinting. Newspaperofrecord who won all her races as a 2 year old before going winless at 3, won her 4 year old debut in the Intercontinental. Not sure if she is back or if she just really likes yielding turf.

Code of Honor came back strong catching Endorsed late to win the Westchester. Improbable put together a dominant performance in the Hollywood Gold Cup and he seems to have taken a step forward in his 4 year old season. They can all be players in the handicap division. Honor A.P. announced his status as a Kentucky Derby contender with a dominant win over favored Authentic in the Santa Anita Derby. Let’s look at some races.

The Santa Anita 3rd is a $10,000 claimer going 7 furlongs on dirt. I have trust issues with both the morning line favorites. Burn Me Twice almost won at this level last time but that was two and a half months ago, his rivals have all started at Santa Anita since it returned to racing a few weeks ago and there is speed to his outside to keep him honest. Also with several class droppers, I feel like someone catches him.

Black Storm looks like the favorite on paper as he has plenty of races good enough. I just find it hard to trust him considering he was claimed $16,000 2 races ago and after a failed attempt for $25,000, he drops to his lowest evaluation to date.
Imagineiamfastest (7/2 ML) has won at this distance previously and has beaten Black Storm. He has some tactical speed and while mot horses in this race are stretching out from 6 to 7 furlongs, he is turning back. He is my play to run down the favorites in the Santa Anita 3rd.

The Woodbine 8th is a $101,000 allowance for 3 year olds and up going 5 furlongs on synthetic and I’m against morning line favourite Muskoka Son. Muskoka Son broke his maiden at the end of last year but did so earning a low Beyer. In his first try against winners he has to go the shortest distance of his career and I don’t think that helps him.

5 Furlongs seems a tad short for logical closers Tale of Vienna and Stormfuhr who has a tendency to settle for 2nd. Alacritous can win if you believe his last where he provided a 43-1 upset. He has previously lost to other contenders in this race however.
I am not against Trappeze Artist who broke his maiden on debut and appears to have talent if he could ever put it all together. This will be only his 5th career start so there is room to improve.

The horse I want is Maximum Perfection (10-1 ML) and the fact he won his debut tells me he can run well fresh. He is aided by drawing outside the other speed horses. With his post, he’ll either be able to make the lead or track the leader(s) the way he did in his debut. Last year as a 3 year old, he was running competitive races against older horses and he may be able to improve now as a 4 year old.

The Churchill 9th is an Allowance optional claiming event for 3 year olds and up going 1 1/16 miles on dirt. From a pace dynamic there seem to be a couple of early speed horses in Lenstar and Flowers for Lisa, neither of whom I like. Flowers for Lisa will take money but needs to prove his form now that he is no longer in the barn of disgraced trainer Jorge Navarro.

There are also several stone cold closers in Lone Sailor, Rated R Superstar and Scars are Cool. Lone Sailor got really good last spring and almost took the Oaklawn handicap but he has not been able to replicate that form. Scars Are Cool got a great set up last time at Gulfstream and had just enough to hold off a long shot. He has shown a recent tendency to lose ground from the stretch to the wire which is not a good sign. If I had to take a closer it’d be Rated R Superstar who seemingly always comes with a run.

Core Beliefs will likely take money as he was running exclusively in graded stakes company last year but his last race -albeit in a graded stake- was off a 3 month layoff, he didn’t run well and now he’s off a 7 plus month layoff. He will beat me as will My Sixth Sense who I can’t bet off his last race.

I’m not against Bourbon Resolution whose last race off an 8 month layoff felt like a means to an end. He does however have to work out a trip from post 10.

My play is Alkhaatam (10-1 ML) who has enough speed to stay in contact with the leaders and can use that speed to get the jump on the closers. His last 3 efforts routing on dirt were in a graded stake, being part of a pace that fell apart and pulling off a 37-1 upset.