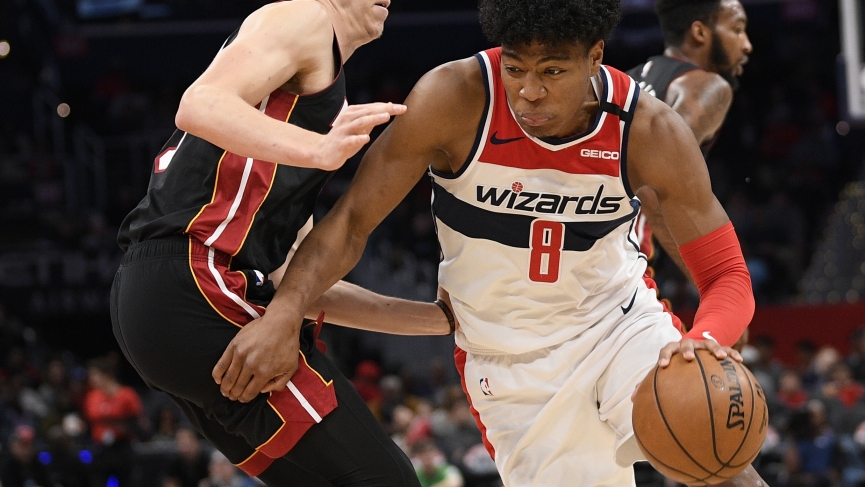 Odds UPDATE: After the publication of this article, Brady Beal announced that he was not joining the team in Orlando.

Bradley Beal will not play in the Orlando restart due to a shoulder injury, Wizards announce pic.twitter.com/F8JWvuuUPZ

After the announcement, these are the updated odds for teams on the bubble.

Despite recent events causing uncertainty for the Brooklyn Nets in Orlando, they’re still massive favorites to make the playoffs. Being involved in a play-in tournament doesn’t qualify as making the postseason, so earning at least the eight-seed is key for this wager. Currently, the Nets own a half-game lead on the Orlando Magic (eighth seed), and hold a six-game lead on the Washington Wizards (ninth seed) which makes sense why the Wizards odds are priced they way they are.

The nine-seed would need to come within four games of the eight-seed in order to force a play-in tournament, so if the Nets get leaped, then they’ll potentially have to defend their playoff berth in a double-elimination tournament. This outcome felt unlikely a few weeks ago, but with the news of Spencer Dinwiddie and DeAndre Jordan testing positive for the coronavirus, the +750 line for the Wizards to make the postseason just got pretty interesting.

Presumably, the Wizards would only get into the playoffs by forcing a play-in tournament with the Nets and defeating them. Brooklyn’s backup center, Jordan, acknowledged on social media that he won’t be joining the Nets in the Orlando bubble after testing positive. Dinwiddie has yet to announce his decision, but there’s a decent chance he sits out. Jordan was logging 22.0 minutes per game in his first season with Brooklyn, averaging 8.3 points and 10.0 rebounds. More importantly, he posted a defensive rating of 105.8 and racked up the fourth-best rebound rate (20.2 percent) in the NBA.

The center is a bigger loss than you may think. Jordan provided the team with depth and plenty of second-chance scoring opportunities off the bench, compiling the 19th-best offensive rebound rate. His rates aren’t far off from how he produced in his final season with the Los Angeles Clippers back in the 2017-2018 season.

With Jordan out, the Nets will have plenty of minutes to divvy up. Rookie center Nicolas Claxton has officially opted out of the restart as well. Sophomores Rodions Kurucs and Dzanan Musa will have to pick up the slack. Kurucs (8.4 percent rebound rate) and Musa (7.7 percent rebound rate) seem like major downgrades with their lack of experience. Brooklyn’s fifth-best rebound rate in the NBA is sure to plummet. This team has seen their situation at center blow up in the blink of an eye.

Guess who loves to get in the paint and wreak havoc? Bradley Beal has posted a career-high 10.9 points in the paint per contest this season. When scorers don’t have their jumper, they go to work inside the paint, and Beal will have that luxury (if he chooses) with Jordan out of the picture.

Schedule Is Set For Wizards Success

Things haven’t been great for this team without their everyday players in the mix. They’re 3-5 in games that Jordan doesn’t play in. Out of those eight contests, five were against teams that will enter the Orlando bubble. The Nets went 1-4 in those games against the Portland Trail Blazers, Boston Celtics, Milwaukee Bucks, Philadelphia 76ers, and Los Angeles Lakers. On top of that, they were out-rebounded by an average of 8.2 boards.

So it goes, as the Nets draw the Bucks, Celtics, and the Blazers (with added size in Jusuf Nurkic and Zach Collins) in their eight-game regular-season ender. They’ll also play the large Los Angeles Clippers, the Wizards, and the Magic twice. This gives Orlando every opportunity to jump Brooklyn for the seven-seed.

Took a flyer on the Wizards (+700) to capture the 8th seed. Now I just need Bradley Beal to actually travel to Orlando pic.twitter.com/3UvQxi1096

The Magic took down the Nets in both meetings this season. Brooklyn was severely out-rebounded (60-46) in a February meeting between the two. This sets the stage for the Wizards to force a play-in tournament with the Nets. Six games is a challenge to come back from, but that’s also possible if Brooklyn tanks hard, which is very possible if Dinwiddie doesn’t make the trip.

The Wizards draw the Phoenix Suns, Nets, and Indiana Pacers in their first three contests. Phoenix is the worst team that was invited back from the Western Conference and Indiana just found out that they’ll be playing without star Victor Oladipo. Things aren’t so easy for the remaining five contests on Washington’s schedule, but going .500 could very well be enough to force the play-in tournament with Brooklyn.

Washington is set to thrive against Brooklyn after defeating them in both of their meetings this season. Bradley Beal went off for a combined 64 points in the contests. The Nets dominated the glass in both games, with Jordan totaling 27 rebounds, but they still lost.

The odds have to be leaning towards Dinwiddie skipping out on the Orlando bubble. Without him, the Nets would presumably roll out a starting group of Garrett Temple, Caris LeVert, Joe Harris, Taurean Prince, and Jarrett Allen. Depth behind the starters would be in shambles and the second unit would certainly get crushed regularly.

Brooklyn Nets Center DeAndre Jordan and Guard Spencer Dinwiddie have both tested positive for COVID-19, sources tell ESPN’s Adrian Wojnarowski. Jordan announced that he will not play in Orlando when the NBA returns to action on July 30th. Dinwiddie has also considered declining. https://t.co/PJgv07LU5a

Brooklyn’s chances of stopping a stellar offensive player in Beal would be microscopic. They already struggled with the point guard when Jordan was clogging up the paint with the second unit. This provides with Beal, Shabazz Napier, and Ish Smith with more room to operate. With a 111.1 team offensive rating (13th-best in NBA), the Wizards will be challenging to slow down. Offense typically gets going faster than quality defense in the early stages of games, so expect offensive outbursts to devour defenses.

The bargain of +750 for the Wizards to make the playoffs is too good to be true. With these series of unfortunate events, Brooklyn is looking like the worst team in the Orlando bubble. As bettors, we are constantly looking for value and this one just reeks of it at an extreme level. Bookies are missing the mark with this line, so take a chance on a big payout that doesn’t seem so far fetched. The Wizards are primed to turn some heads and the Nets are ready to fall flat.