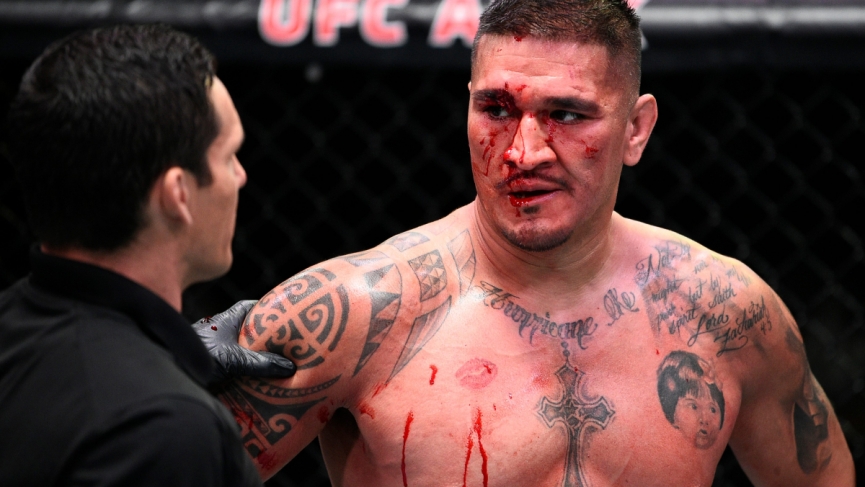 UFC Betting Trends for Wednesday, January 20th: The ‘coin-flip’ favorite in the UFC Men’s Light-Heavyweight division went 7-1 last year for +4.24u profit, and is one of the active betting trends on the board for Wednesday’s UFC Fight Island 8 card.

– For all the current UFC division betting trends, check out our UFC Trends page.

If you plan to back Neal Magny in this fight, the best way to do so is by betting him to win by Decision. Magny has won 11 of his 23 UFC bouts by Decision, profiting more than +20 units on the ‘Decision’ prop in his UFC career.

Let’s take a look at the rest of the UFC Fight Island 8 fight card and the active betting trends worth backing.

As for a straight-up winner, the odds are definitely a lot wider than they should be between these two fighters, likely because of the hype surrounding Mounir Lazzez. The underdog has cashed at a 40% rate in the UFC Welterweight division over the last 13 months, and even if you don’t think Alvez wins this fight, there is definitely value on him at +190 to pull off the upset.

As for the total, based on the betting trends there is a slight bit of value on the Over. Last year the total in this division was split almost exactly down the middle, with the ‘Under’ cashing at a 51.4% going 18-17. With a fade price of +106, the Over has value in a fight in which the market expects a quick finish from either of these fighters.

There are two UFC Women’s Flyweight bouts on Wednesday, and based on the betting trends over the last few years, the value will always be on the dog at women’s 125lbs. The Underdog has won 15 of the last 28 UFC Women’s Flyweight bouts, profiting for a hefty +15.05 units profit in 2020. Meanwhile, the Under in women’s flyweight has hit at the highest rate in women’s UFC divisions, going 14-19 for +6.8 units profit. The division trends say bet the dogs and the under at this price range. Roxy Modaferri coming in as a +250 dog, while Victoria Leonardo is lined at +160. The Under in the Leonardo/Fiorot fight is a little bit steep at +150, but it’s still worth a shot, and at +243 on the Under in the Modaferri/Araujo fight, the numbers have shown that even if this bet doesn’t win, it’s a long term winning play to make.

There are three UFC Men’s Flyweight bouts on Wednesday’s card, kicking it off with the brother of the current Flyweight championship, Francisco Figueiredo steps in as a coin flip favorite of about -145. The betting trends say there is value on the coin flip favorite at flight, which went 5-0 in 2020. Both Figueiredo and Tyson Nam are lined as coin flip chalk favorites, which are bets worth making. The other flyweight bout sees ‘the Tibetan Eagle’ Su Mudaerji as a heavy -490 favorite against Zarrukh Adashev, and while Mudaerji likely wins this fight, there is definitely some value on Adashev at that inflated price of +340. The favorite has won 20 of the last 26 flyweight bouts in the UFC, but even then, the numbers just don’t exactly support betting on Mudaerji as an astronomical favorite.

The Under in the UFC Men’s Flyweight division hit at a 53.8% rate in 2020, profiting for +5.11 units along the way. Based on implied probability, the Under at flyweight has value at any price of -116 or better. In the Rivera/Figueiredo fight, the ‘Under 2.5’ is lined at +148, as the finishing ability of either fighter is not being taken seriously by the betting market. However, the better market is swayed heavily towards the Under in the other two Flyweight bouts, which lends reason to get behind the Over. The ‘Under 1.5’ rounds prop in the Mudaerji/Adashev fight is lined at -119, which is beyond the buy price of -116, and in fact there is value on the ‘Over 1.5’ at -109, with the market expecting such a quick finish. Meanwhile, the market hasn’t come in as heavily on the ‘Under’ in the Tyson Nam/Matt Schnell fight, but you’re still being asked to bet an Under at -136, when the price should most definitely be closer to -115. For that reason, you gotta flip the script and take the ‘Over 2.5’ at +108, seeing as the market is also expecting this fight not to reach the latter parts of the third round, when the data shows that it’s far more probable than the odds are indicating.

There is just one UFC Featherweight bout at UFC Fight Island 8, and it is the opening bouts on the main card. Lerone Murphy is a -320 favorite to Douglas Silva de Andrade, who is a +245 dog on the comeback. Based on the historical trends at Featherweight, the ‘Over 2.5’ rounds prop in this bout has a lot of value at -104. The Over has hit in 41 of the last 58 featherweight bouts, and at the odds you are currently getting the Over at, you can’t go wrong, win or lose. As for a side, Lerone Murphy probably wins this fight, but the odds seem to be a little bit skewed. The favorite at featherweight has won 62% of bouts over the last year, but hasn’t failed to turn a profit, losing -3.9 units in 2020. The underdog has won 45 of the last 118 UFC featherweight bouts, going back to January of 2019, which is 38.1%. Based on those trends, there is value on Douglas Andrade at +245.

There is two middleweight bouts on Wednesday’s UFC card, starting off with the Congolese Dalcha ‘Champion’ Lungiambula taking on the Brazilian Joker, Marus ‘Maluko’ Perez. Dalcha opened as a mid-range coin-flip favorite around the -138 range, but has since moved to as high as -150. The favorite has won 70% of bouts at middleweight over the past 13 months, and even with Dalcha taking steam, there still looks to be value on him based on current division trends. Meanwhile, the total in this fight is lined at ‘1.5’ with the Under priced at +118. There is definitely value here considering the Under has hit at almost a 60% rate in the middleweight division since the start of 2020.

The other middleweight bout is the featured prelim between the Russian ‘Wolverine’ Omari Akhmedov, as he takes on the UK’s Tom Breese. Breese is lined as a -160 favorite, which is quite steep but there is still value there based on the division betting trends. The total in this fight is lined at ‘Over/Under 2.5’ with the ‘Under’ having value at the current +123 price.

There is two UFC men’s bantamweight bout on the card for Wednesday, one which sees the Vancouver, Washington native Ricky Simon coming in as a heavy -475 favorite against Belgium debutant Gaetano ‘El Tigre’ Pirello. Simon sits just outside of the Bantamweight rankings and will likely earn a shot against a ranked opponent with a victory. While Simon looks poised to pick up the victory here, the odds are once again way to skewed to bet anything but the dog. The favorite won 66% of fights at Bantamweight in 2020, going 35-16-2 for +1.23 units profit, and has held that same win percentage going back over the last two years, with the favorite going 79-37-2 for +2 units profit going as far back as January of 2019. Either way, you’re looking at a division where the favorite wins about 6.5 times out of 10, which means that betting against a favorite of this high of a price would be considered a +EV bet, based solely on the division trends.

The same sentiment can be applied to the other UFC Men’s Bantamweight bout on the card. The cousin of Khabib Nurmagomedov makes his UFC deut on Wednesday, as Umar Nurmagomedov takes on the Kazak Sergey Morozov. Umar is getting a whole lot of love from the market, opening as a -475 favorite but has been bet up to as high as -550. Based on the division trends, this is a dog or pass, and with the +375 on the other side, it seems like a value play to bet against the Russian here.

As for the totals, the ‘Under 2.5’ in the Simon/Pirello fight is lined at +103, which is where the value seems to be in this one. The Under hit at a 50.9% rate in 2020, going 27-26 for +9.99 units profit. If you’re able to get an under in this division at anything better than +money, you are encouraged to take it. In the other bout, the market very much expects Umar Nurmagomedov to take a decision victory over his opponent on Wednesday, which sees the ‘Under 2.5’ lined at +166. At +166 you are getting a ton of value on a total that should be lined closer to +115.

There is just one UFC Lightweight bout on Wednesday card, which sees the former Cage Warriors two-division champion, Mason Jones, making his UFC debut against the ‘Beast Boy’ Mike Davis. Davis is a -170 favorite to Jones, and the value undoubtedly lies on the side of the Welshman Jones in this one. The Underdog has won 41.5% of fights at Lightweight over the last year, going 22-31 for +6.87 units profit. Based on that trend, there is value on Jones if you can get him at the price of +141 or better. Meanwhile, as for the total, the ‘Under 2.5’ rounds prop has value at +120. The Under hit at a 50.9% rate in 2020, profiting +5.28 units. Based on that division trend, any Under at -104 or better is a bet worth making at lightweight, and especially between two warriors who both have the ability to finish a fight.