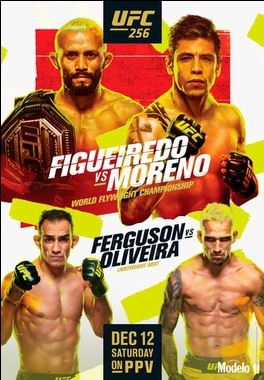 Figueiredo has the opportunity to become the first UFC champion to defend his belt twice in a 21 day span.

Deiveson Figueiredo and Brandon Moreno had one of the greatest fights in the UFC’s Flyweight history. A five round war that culminated in a (48-46, 47-47, 47-47) majority draw. Figueiredo was deducted a point for a groin kick in the 3rd round, which set the table for the potential for the draw to occur. Needless to say, this will be a fight that we will see again.

Charles Oliveira picks up the dominant (30-26) decision victory over Tony Ferguson. With the victory, Charles Oliveira improves to 18-8 in the UFC since hs debut in 2010, profiting +6.51 units on the moneyline along the way.

MacKenzie Dern picks up the win in one of the most entertaining bouts of the night. In what was supposed to be a display of high level grappling turned into a stand-up war between two very game strawweights. With the victory,  Mackenzie Dern improves to 10-1 since her LFA debut in 2016, for a moneyline profit of +1.65 units.

Kevin Holland picks up the first round KO victory over Jacare Souza as a +105 underdog. With the quick stoppage, the Under in the UFC middleweight division improves to 26-18 for +9.65 units profit.

Ciryl Gane picked up 2nd round TKO victory over Junior dos  Santos, Gane cashes as a heavy -395 moneyline favorite. With the victory, Gane improves to 4-0 in the UFC since his 2019 debut, profiting +1.04 units on the moneyline along the way.

With the fight going Over the betting total by just 4 seconds. The Over in the UFC heavyweight division has gone 25-20 in 2020 for +1.83 units profit.

Cub Swanson pulled off the upset as a +145 underdog over Daniel Pineda. With the victory, Cub Swanson is now 15-10 on the moneyline going back to his years in the WEC. In that 13 year span, Swanson backers have profited +5.22 units.

Rafael Fiziev picks up the stoppage victory over Renato Moicano as a coin flip favorite. With the victory, Fiziev is now 3-1 in the UFC since 2019, with a moneyline profit of +2.25 units.

Gavin Tucker picks up the win as a +160 underdog. With that, Tucker now improves to 4-1 in the UFC with a moneyline profit of +3.21 units.

We’re right back to Vegas next Saturday for the final UFC event of the year.