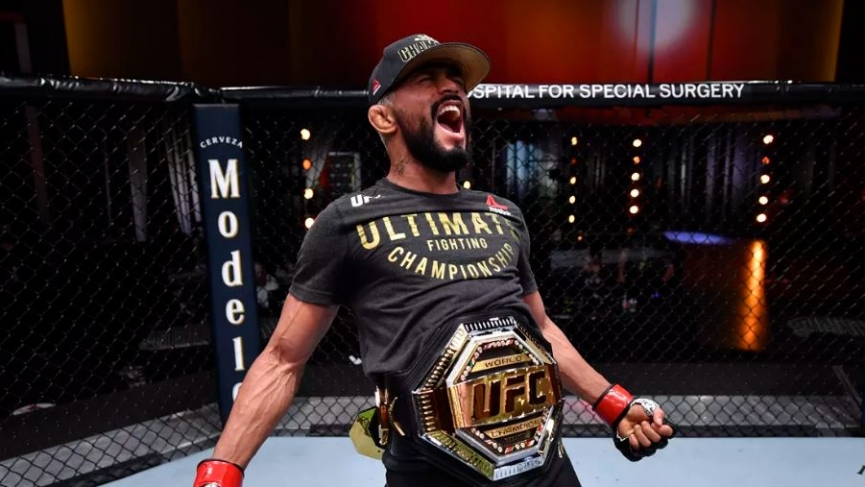 Deiveson Figueiredo vs Brandon Moreno Pick – UFC 256: Deiveson Figueiredo has finished 7 of his 10 UFC fights, cashing for +11.38 units on the ‘Inside the Distance’ prop, as well as +7.17 units on the moneyline, with a 9-1 record. On Saturday night at UFC 256, ‘the God of War’ takes on yet another challenger in 2020, as Brandon Moreno hopes to make history and become the first Mexican born UFC champion.

If you feel like we were just talking about these two men, then don’t worry; you aren’t crazy. Both Champion Deiveson Figueiredo and challenger Brandon Moreno were in the cage very recently at UFC 255. In fact, when the cage door closes on Saturday, Figueiredo and Moreno will be setting the record for the fastest turnaround for any UFC champion in the history of the company. This fight came together very naturally, and both men are capitalizing on their current success; and this fight should be awesome.

The God of War Deiveson Figueiredo is perfect if not for one single fight over his 8-year career. Figueiredo is an absolute monster who has destroyed the UFC people in front of him. Figueiredo has shown nothing but constant improvements over the last two years, and it has culminated with a title fight against long time contender Joseph Benavidez. Figueiredo missed weight, and then a clash of heads marred his KO victory and cost him the title, so the UFC ran it back, and in the rematch, Figueiredo left no doubt that he was the king. Then the God of War ran through challenger Alex Perez in a fight where many people thought Perez would have the perfect style to cause the champion fits.

Brandon Moreno is one of my favorite fighters in the UFC. Moreno got to the big show a little too early in his MMA career and was dropped from the organization after a rough run and has had to work his way back. Now that Moreno is back in the UFC, he is taking on all comers and has put together a nice streak. Moreno recently ruined my night by taking out Brandon Royval and capitalizing on Royval’s arm dislocating in their fight, but we cannot take away what he did before that. Brandon Moreno is not to be overlooked.

I have cheered for Brandon Moreno his entire career, and now I find myself conflicted because I have been saying that this warrior was a dark horse for the title for years. Finally, Brandon stands with a chance to make good on that chance, and I am struggling to find a way for him to win this fight. Brandon is a game fighter and cannot be counted out against anybody, but I have been turned. I have seen the light. Long may Deiveson Figueiredo reign!

The new King of the Flyweight division is a physical monster who none can stand toe to toe with, and that is exactly how Brandon Moreno fights. Moreno may be a better technical boxer than Figueiredo, but Moreno fights in a fan-friendly style where he is willing to trade with his opponents, and I think he has finally met his match. Moreno averages 3.01 significant strikes per minute and absorbs 2.96, meaning that he essentially goes 1 for 1 with his foes when trading power shots. Figueiredo has built his 20-1 record on trading with his opponents and simply being god gifted with better durability and unreal power.

UFC 256 Main Event Best Bet: Deiveson Figueiredo (-334) via Bet365: Moreno has never been finished in his professional career, but all good things must come to an end. I believe that on Saturday night, we will see the champion retain his title, and Brandon will suffer the first knockout loss of his career. The only question about this fight is the quick turnaround for both men. Deiveson is well documented to have a really rough weight cut, and getting back down to 125 in just a few weeks may be a challenge.

I personally have a parlay with Figueiredo, and I still think that it’s okay to do so, but watch the Friday weigh-ins closely. If Figueiredo has a bad weight cut and looks bad on the scale, but Moreno looks like a million bucks, then you have an easy way to hedge out of your bet with Moreno being such a big underdog. I expect Deiveson to be okay, and I expect him to dominate another fight. Maybe even sprinkle those round props for 3,4 and 5. It might take a bit longer for the finish to materialize with how durable Moreno is, but I am riding with the God of War.

Moreno has 9 UFC bouts since 2016, but 10 professional MMA bouts.  After back to back losses in 2018, Moreno moved to LFA in June of 2019, winning their Flyweight title over Maikel Perez by 4th round stoppage as a -145 favorite. Since returning to the UFC in September of 2019, Moreno is undefeated with a 3-0-1 record.