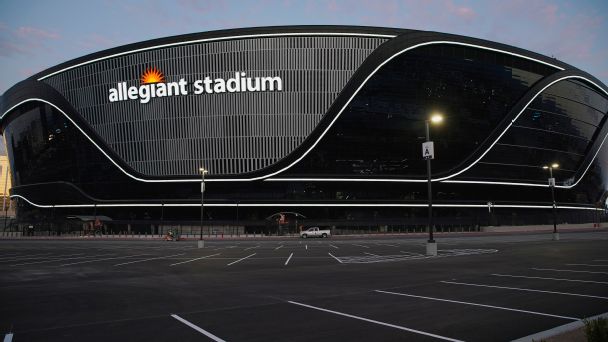 Odds.com’s New Orleans Saints vs Las Vegas Raiders Pick for Week 2 MNF: The Saints come into Allegiant Stadium on a 4-0 ATS run when road favorites, while the Raiders are 6-2 ATS in their last 8 games as home dogs. Something has to give in this first Monday Night Football showdown at ‘the Death Star’

The Las Vegas Raiders will look to go 2-0 with a win in their first home game in the Allegiant Stadium in Las Vegas. With an upset win over the Saints, the Raiders would be 2-0 for the first time since 2017, and only the second time since they started 2-0 in the 2000 season. The move to Las Vegas and the more than state-of-the-art stadium fits the Raiders icon, and brand, and will propel this team into a new era of winning.

The Saints have been a perennial playoff team over the past decade, but they have been slow to start the offensive engine at the beginning of the season. Surprisingly, they have not been 2-0 to start a season since 2013, and have a few 0-2 or worse starts during this span. In case you wanted to know, after a straight-up (SU) win in Week 1, the Saints are 8-5 SU, and 6-7 against-the-spread (ATS) in Week 2 action since 1990, and 5-3 SU, and 3-5 ATS since 41-year old Drew Brees became their starting QB in the 2002 season.
The Saints Current State of Affairs

In Week 1 the Saints faced the Tampa Bay Buccaneers, and their new QB Tom Brady. The Saints were fired up to send a message to the Bucs, and the NFC Conference that Mr. Brady was not the new sheriff in the NFC South with a 34-23 SU, and ATS win. Brees completed 60% of his 30 pass attempts for 160 yards, 2 touchdowns, and no interceptions. He took 97% of the snaps running 67 total plays and was sacked only once.

The New Look Raiders are Contenders

The Raiders defeated the Carolina Panthers 34-30 and covered the spread as a road dog in Week 1 action. Clearly, head coach John Gruden has his team fully prepared to start the season well. QB Derek Carr had a solid game completing 22 of his 30 pass attempts for 239 yards, and a touchdown. Carr has always been gifted with an extremely strong arm but forced too many throws into tight spaces that many times resulted in drive ending interceptions. He has matured with his decision making, and this Week 1 win was one of his best. Carr enters his 8th season as the Raiders starting QB and has had 19 comeback wins, and 20-game winning drives.

Since 2014, the Raiders with Carr starting at QB have gone 6-5 SU, and 7-4 ATS following a road win in which he threw for at least 200 yards. Here is some poor news for backers of the Raiders in tonight’s game. The Raiders are 7-17 SU, and 8-16 ATS for 33% winning bets when Carr completed 70% or more of his lasses in their last game.

A Strong and Simple Betting System

This betting system is active for a bet on the Saints tonight and has earned a remarkable 28-5 ATS mark for 85% winning bets over the past 30 seasons. The system requires us to be on-road teams that are facing an opponent that had a struggling defense in the previous season that allowed an average of 24 points-per-game and are coming off a game in which they scored 30 or more points.

The machine learning models project that the Saints will average at least 7.0 yards-per-pass-attempt, and will have at least 5 more first downs than the Raiders. The Saints are 54-10 SU for 84% wins, and 54-9-1 ATS for 86% winning bets that covered by an average of 11 points when they met or exceeded this pair of performance measures since 2002. Take the New Orleans Saints as a Best Bet Road Favorite tonight. The best price on the Saints currently is at -4 (-107) via BetRivers.