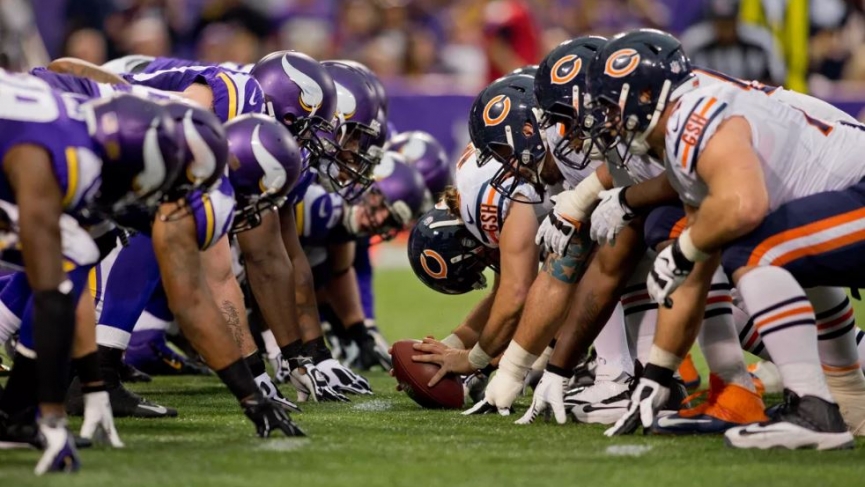 Minnesota Vikings vs Chicago Bears Pick – NFL Week 10: Mike Zimmer and the Vikings come into Monday night riding a 5-1 ATS streak in their last 6 games, while the Bears are 5-1 ATS in their last 5 against an NFC opponent.

The Minnesota Vikings have won two straight, being led by running back Dalvin Cook, who leads the league in rushing. He has had 163 and 206 yards rushing, respectively, in the past two weeks. In total, Cook has four 100 plus yard rushing games this year, and they have led to all three Minnesota wins, and the other came in a one-point loss to Tennessee.

Dalvin Cook will have a tougher test this week, however, against the Chicago defense that faced the number two rusher in the NFL last week in Derrick Henry. The Bears held Henry to just 68 rushing yards and a pedestrian 3.2 yards per carry. The Bears’ ability to limit Cook will impact their overall success in this contest as the Vikings have been blown out three times. In two of those games, they could not get Cook going, and he missed the other game with an injury.

Chicago is currently on a three-game losing streak and continues to be plagued by an inept offense. Three weeks ago, against the Rams, their only touchdown was a defensive score. They were able to move the ball okay against the Saints. Last week against the Titans, they didn’t score a point until the fourth quarter when trailing 17-0 and scored their first touchdown when down 24-3. The final score of 24-17 looks respectable, but you could argue all of the Bears points came in garbage time.

Chicago should have some success throwing the football, especially to their receivers such as Allen Robinson, who has had a strong season ranking 8th in the NFL in receptions and 6th in yards. Thanks to off-season departures and injuries, Minnesota has had a revolving door in their secondary, having played eight different corners and four safeties, which led them to rank 27th in opponent yards per pass attempt.

Corner Cameron Dantzler is currently listed as questionable with a concussion, and if he does play, the Vikings will be starting two rookies at corner. If he does not play, second-year pro Kris Boyd will start, so Minnesota is currently very young in their secondary.

My lean on the side would be Chicago money line as they have owned this meeting in recent seasons, having won four straight. Also, they showed last week they could stop an elite running back, and if they can slow down Cook, I’m not confident in Vikings quarterback Kirk Cousins’ ability to win the game. I prefer ‘under’ 44 as I don’t expect Minnesota to be successful offensively, but nothing Chicago has done offensively gives you much confidence.  All the recent meetings between these two have been low scoring as only one of the past six contests has seen a combined score of over 40 points. Both teams have elite red-zone defenses; thus, expect field goals, not touchdowns. Take ‘under’ 44.