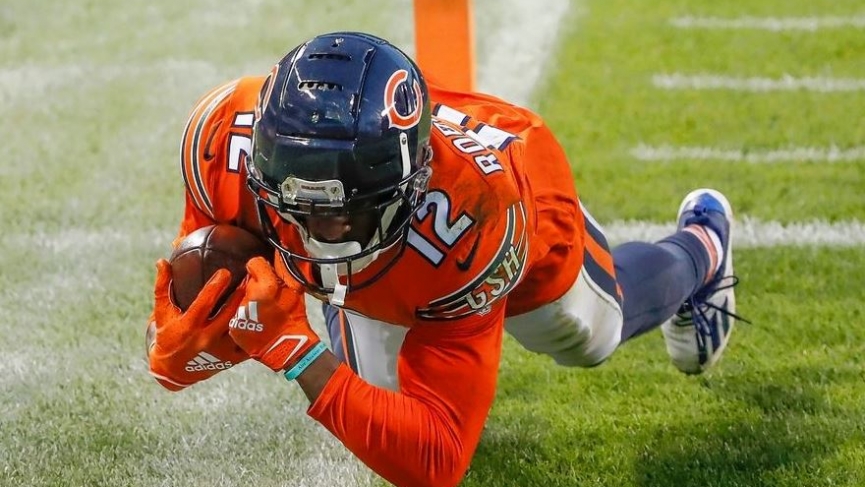 Carolina has been missing their best offensive player since week two in all-pro running back Christian McCaffrey who has been dealing with an ankle injury. In the interim, Mike Davis has taken the leading running back responsibilities, and statistically speaking has held his own. McCaffrey was averaging 3.8 yards per carry through two games whereas Davis is averaging a full yard more at 4.8 YPC. Similarly to McCaffrey, Davis can also catch passes out of the backfield as he has caught at least five passes since he has become the starting running back.

You might argue that McCaffrey was a bigger threat thus teams are committing less attention to stopping Davis. The only issue with that argument is that Carolina has had success throwing the football all year as they are 9th in the NFL in yards per pass attempt at 7.9 yards and over the past three games they are also averaging 7.9 yards per pass attempt thus no difference.

The one thing Carolina has had some benefit in the last few weeks is facing injury-riddled teams. In week three, the Chargers were missing multiple players on their defensive line and lost starting corner, Chris Harris Jr., against Carolina. The best offensive output Carolina had this season was against Arizona in week four but note Arizona was missing both their starting safeties in that contest. Last week, Atlanta who has been plagued by defensive injuries throughout the year, got several players back from injury but that was not a cohesive stop unit as they had barely played together.

Chicago on the other hand brings a healthy defense with extra time to prepare having played last Thursday. Note they are ranked third in the NFL allowing just 6.1 yards per pass attempt thus they match up well with Carolina’s strength.

Three weeks ago, the Bears starting quarterback Mitchell Trubisky was benched in favor of Nick Foles with Chicago trailing 26-10 in the middle third quarter. Foles would end up playing hero leading the team to three touchdown drives in the fourth quarter to win the game. As we have seen previously in Foles’ career however he could not replicate that success the following week as the starter against Indianapolis leading the team to just one touchdown drive and it came in garbage time. Chicago had one legitimate touchdown drive against Tampa Bay last week when late in the second quarter they went 75 yards. Their other touchdown was scored moments later when the defense forced a turnover and set up a quick score. The offense has been inconsistent all season but their success on offense this week might be somewhat dependent on Carolina’s defensive injuries, at least in the passing game.

Carolina defensively suffered some injuries last weekend to their defensive line as starters Brian Burns and Yetur Gross-Matos were injured and neither practiced Wednesday. This after finding out that Kawann Short was lost for the year. Starting corner Donte Jackson was also injured at the beginning of the Atlanta game last week and was a limited participant in practice.

The one thing Carolina has been unable to do at any point this year is to stop the run. They rank 31st in the NFL allowing 5.4 yards per rush. Considering Chicago’s last two opponents were Indianapolis and Tampa Bay who rank 4th and 1st respectively in yards per rush allowed, Chicago should have more success this week picking up yards on the ground.

When it comes to red-zone drives ending in touchdowns, both Chicago and Carolina rank in the bottom 10 in the NFL at 25th and 27th respectively in red-zone touchdown percentage. On the flip side, Chicago owns the number one red-zone defense allowing touchdowns on just 36.8% of red-zone drives. The ability to hold teams to field goals was evident last week when Tampa Bay scored five times but had to settle for four field goals.

Carolina has had one good game scoring touchdowns against Arizona when their first four scores all ended in 6. Against the Chargers, however, they scored 21 points but note that was one touchdown and five field goals. Last week against Atlanta, Carolina got a big play 57-yard touchdown but settled for three field goals in their other four scoring drives.

After conceding an opening drive touchdown, Carolina was able to hold Atlanta to three field goals the rest of the game despite the injuries they had suffered.

The best current price on the Under is at 44.5 (-109) via ResortsCasino: Trusting Chicago to win the game with their inconsistent quarterback play seems unappealing especially in this point spread range where they have to win the game to cover. Chicago is however the healthiest team Carolina has played recently and Carolina also has injuries to deal with. If Chicago gets their game scrip, expect good defense and to attack the weak Carolina run defense leading to a fast-moving contest. Neither team is proficient in the red-zone thus expect field goals instead of touchdowns.