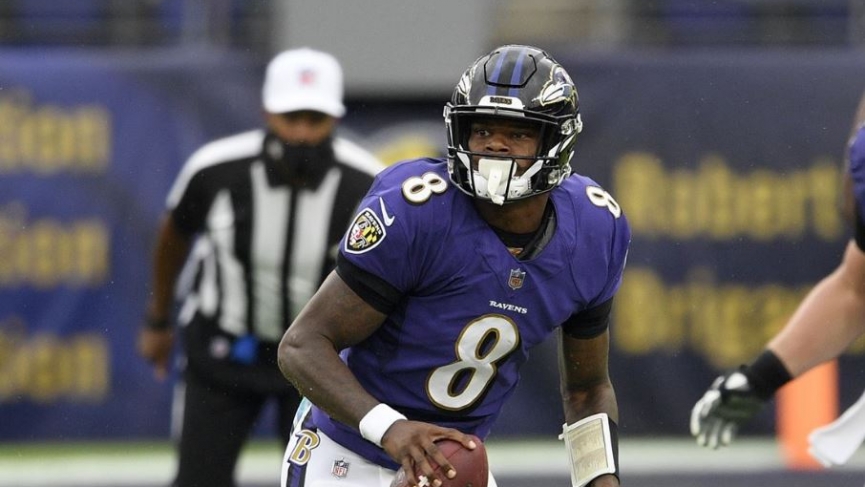 The Baltimore Ravens will take a short ride up I-95 to take on the Philadelphia Eagles at Lincoln Financial Field starting at 1:00 PM EST. Injuries have decimated the Eagles, especially at the wide receiver position, that has been the root cause of their terrible 1-3-1 straight-up (SU) record and 1-4-1 against the spread (ATS) record. The Ravens are off to another strong start winning four of their first five games. They have earned a 3-1-1 ATS (wins, losses, pushes) record from the first five games of the season.

The Eagles injury report lists 12 players as questionable for this Sunday’s game. Wide receiver Alshon Jeffery was listed as a limited participant in Wednesday’s practice, and even if cleared to play, his overall effectiveness remains mostly unknown.

Starting cornerback Avonte Maddux was listed as a limited participant in Wednesday’s practice recovering from an ankle injury, and it is unlikely he will see action in this game.

Wide receiver DeSean Jackson continued to nurse a hamstring injury and was a limited participant in Wednesday’s practice. Again, his overall effectiveness at the WR position is highly suspect. Rookie first-round draft pick Jalen Reagor remains on the injured reserve with a severe thumb injury and is out for this game. So, the entire trio of starting wide receivers has not been on the field together since the first game of the season.

The Ravens Pair of Cornerback Injuries

By way of comparison, the Ravens have six players listed as questionable in their injury report. Two of these injured players are cornerbacks in Jimmy Smith and Marcus Peters. Smith did not suit up, and Peters was a limited participant in Wednesday’s practice.

The Ravens defense made a great pick in the first round of the 2020 draft, selecting former LSU standout and starting middle linebacker Patrick Queen. He has elite lateral quickness sideline to sideline and has the speed to run down running backs with ease. As a rookie, he runs to the ball and throws himself into blocks with the skill of an NFL veteran.

The Eagles ground attack will face a tough assignment to minimize Queen’s impact on drives, especially on third-and-short situations. The Eagles offense ranks 28th in the NFL, scoring an average of 22.6 points-per-game and 29th averaging just 5.0 yards-per-play. Based on these measures, the Ravens defense is fully capable of shutting down the Eagles offense.

The Eagles quarterback Carson Wentz has had to adjust to the injuries at the starting wide receiver position but does not explain why he is leading the NFL with 39 bad throws, which ranks fifth-worst with 21% or one pass in every five throws, which no wide receiver can catch. Further, Wentz ranks fourth-worst with 72% on target percentage. He is only better than the Bears Mitchell Trubisky, benched two weeks ago, the Washington Football team rookie Dwayne Haskins, and the Browns‘ Baker Mayfield in on-target percentage.

Here is a betting system that has earned a 64-32-2 ATS record for 68% winning bets over the last ten seasons. The betting system supports the Eagles and requires a bet on home underdogs, facing a dominant opponent, who outscores their opponents by a minimum of 10 points-per-game and are coming off a win of 10 or more points.
The betting system supports Philadelphia, but there is far more research needed than just trends to properly handicap an NFL matchup.

Take the Baltimore Ravens -7.5 (-110 via  PointsBet) as a Best Bet: The machine learning models project that the Ravens will gain a minimum of 150 rushing yards and have fewer turnovers than the Eagles. In past road games in which the Ravens were favorites and met or exceeded these performance measures, has led them to an outstanding 14-0 SU record, winning the games by an average of 20.4 points, and a 12-2 ATS record, for 86% winning bets that covered the spread by an average of 14.6 points.