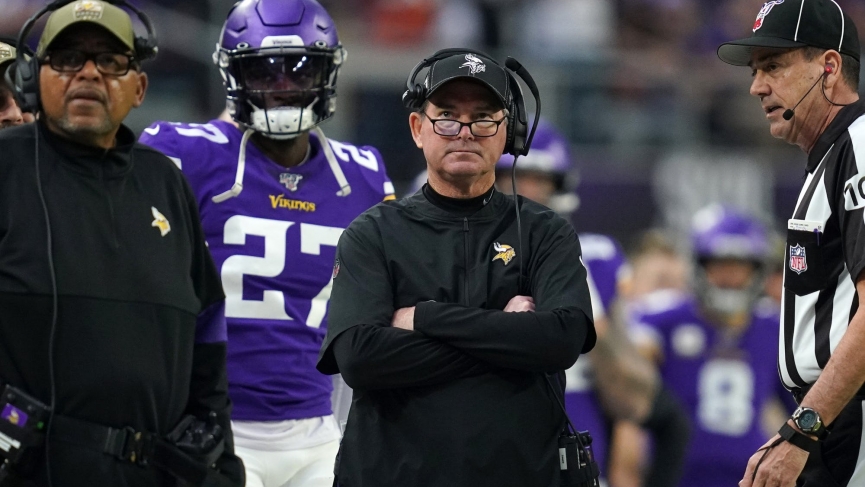 Odds.com’s Atlanta Falcons vs Minnesota Vikings Pick – NFL Week 6: Mike Zimmer and the Vikings are 1-4 ATS in their last 5 as a home favorite, while the Falcons are 5-1 ATS in their last 6 as road dogs. It’s a battle of two question mark teams, as far as expectations go. The Vikings are far worse than what was expected, while the Falcons may be the best 0-5 team in recent NFL memory.

The winless Atlanta Falcons will be on the road with their newly appointed and interim head coach Raheem Morris to face the 1-4 Minnesota Vikings at U.S. Bank Stadium. Both teams have struggling defenses, with the Falcons ranking 31st and the Vikings 28th in scoring defense. The Vikings are favored by four points, and the total comes in at a lofty 54.5 points.

The Popular Bets Point to the ‘UNDER’ and Falcons

The betting line opened with the Vikings favored by 3.5 points and attracted immediate action on the Vikings that pushed the line to change to 4 points. The total has seen far more bets on the ‘UNDER’ than the ‘OVER’, which is surprising given the struggles of both team’s defensive units this season. The ‘UNDER’ has tallied 55% of the bets placed and 67% of the money, pushing the line ½ point lower to 54 points. The ‘UNDER’ trend is gaining momentum and may cause the total to move down to 53.5 points on game day.

The Falcons offense has many more moments playing at a high level than not. Their defense has been a dog’s breakfast, to put it nicely, and has received the blame for the five losses. The Falcons have had leads in 4-of-5 games. They blew a 20-point lead in a loss to the Dallas Cowboys in Week 2. In the next week, coughed-up a 16-point lead in a loss to the Chicago Bears. The only game they did not lead was at Lambeau Field, losing 30-16 to the Green Bay Packers. So, the defense is accountable for these horrible losses, and they are unlikely to get better anytime soon.

The inability of the Falcons to hold leads and complete games earning wins cost head coach Dan Quinn his job. Ever since the epic collapse in the Super Bowl 34-28 overtime loss to the New England Patriots in the 2016 season, the Falcons have not been able to attain win streaks. Since the Super Bowl, they have played 53 games and have blown leads in 20 of them, accounting for 38% of the games. The Falcons must rid themselves of expecting the worst to happen in the second half of games. Instead, they must learn how to keep the foot on the gas peddle and make leads even bigger.

There are two betting systems that support the winless Falcons in this road game against the Vikings. The first one has earned a solid 113-69-2 against-the-spread for 62% winning bets over the last 30 seasons. The requirements focus on offensive and defensive scoring.

The second NFL betting focuses on turnovers, which have a huge correlation to wins and losses for any football team. The system has earned a 28-8 ATS mark good for 78% winning bets spanning the last five seasons and has four requirements.

Take the Atlanta Falcons +4 (-110 via  PointsBet) as a Best Bet: The Vikings running back Dalvin Cook has been declared ‘OUT’ for this game, suffering from a groin injury. He is a massive part of the Vikings offense and will give the Falcons an even greater chance of winning this game.

The machine learning models project that the Falcons will out gain the Vikings by at least 100 total yards and will score at least 24 points. In past games in which the Falcons met or exceeded these performance measures has led them to a 52-5 straight-up (SU) record good for 91% wins and a 49-8 ATS record good for 86% winning bets covered the number an average of 14 points. The Falcons finally hold on to a lead and win the game.