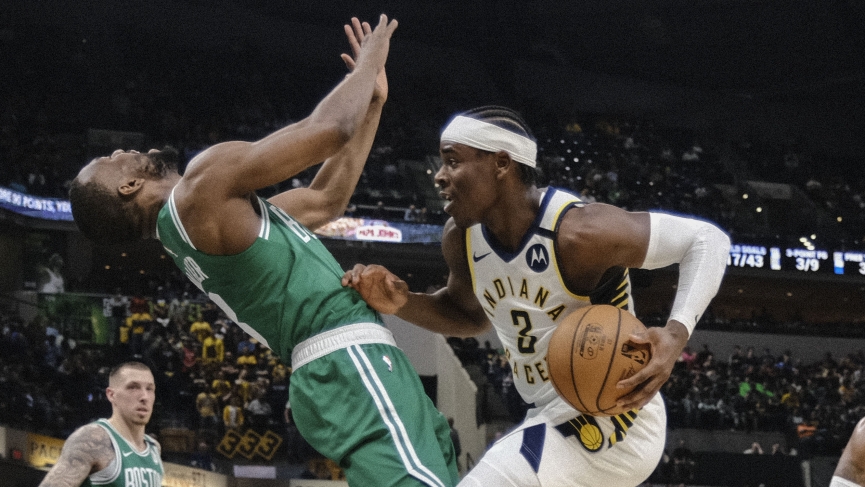 The Pacers are currently the fifth seed in the East at 39-26. If the playoffs were to start now, they’d face the Miami Heat on the road. With sportsbooks like DraftKings, FanDuel, and FoxBet sharing opinions on +10000 for championship odds, are the Pacers worth a flier? That would be a NO!

This starting five is much better than people give them credit for. They’re incredibly efficient offensively, posting the third-best field goal percentage (47.7) in the NBA. The Pacers also boast the second-best assist/turnover ratio in the NBA at 1.98, just behind the San Antonio Spurs. Efficiency is key in the postseason and this team doesn’t turn the ball over often.ds

Malcolm Brogdon has become a true point guard, boosting his assists to 7.1 per contest after averaging just 3.2 a season prior. On top of that, he’s scoring. The Pacers are hopeful that Brogdon’s three-point percentage jolts back up with Oladipo back and drawing attention. Brogdon shot 42.6 percent from deep last season but is at a pathetic 31.3 percent now. This is a bit concerning. Something else that’s concerning is his health status. More on that later. 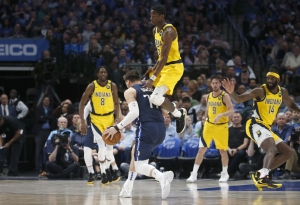 The big men on this team are intriguing! Domantas Sabonis saw a jump in playing time and has made the most of it. He’s averaging 18.5 points, 12.4 rebounds, and 5.0 assists per contest. Despite being a power forward, Sabonis ranks 13th in defensive rebound rate. Myles Turner lives out beyond the arc a bit too often, but he’s averaging 2.2 blocks per game, providing an interior presence. Among players that log at least 20 minutes per game, Turner has the sixth-best block rate.

T.J. Warren continues to provide scoring at 18.7 points per game, but you’re really banking on Oladipo’s capabilities at this point. For a legitimate futures bet, there has to at least be some optimism around Oladipo, who was the centerpiece in the Paul George trade from Oklahoma City.

At first, the Indiana Pacers struggled to implement Victor Oladipo into the rotation when he returned from a ruptured quad tendon. The guard made his return to the game almost exactly a year after the injury. The squad lost five of the first six games that Oladipo played in. Since that skid, they’ve gone 8-3 up to when the season was suspended and took down teams like the Milwaukee Bucks, San Antonio Spurs, and Dallas Mavericks.

How Health Can Play A Role

Oladipo has had some time on his hands. This was never more evident than when he was seen unmasked on The Masked Singer months ago. Oladipo said the organization was fine allowing him to focus on something else to keep his mind off of the nagging rehab that he was going through.

Betting on The Favorites, Longshots and No Chance to Win 2020 NBA Finals

With just 13 games under his belt (basically in the past 13 months), he’s the real wild card. In fact, the last game before the NBA suspended its season was his best. The shooting guard shot 9-for-16 and scored a season-high 27 points. He also contributed seven boards and dished out four assists, and this was against the Boston Celtics. This is what we were waiting for.a

Back to Brogdon. The point guard was diagnosed with a torn rectus femoris, one of the four muscles in the quad. We have yet to see the point guard move since the NBA suspended the season, but the internet was buzzing two weeks ago when Brogdon announced he’s 100 percent healed. This is very possible, but we don’t really know. Still, the time off may have saved their season and could very well give them a chance in the playoffs.

To Bet, Or Not To Bet

Health is a small question at this point, but it’s leaning more on the positive side. Oladipo needs to be performing at his peak for this team to have a chance at getting through the East and eventually winning the whole thing. He’s very capable, as he averaged 23.1 points in the 2017-2018 season. The flash we saw against the Celtics was impressive.

The bench for this team isn’t anything special. This should prove to be their Achilles heel. I’m in love with the starting bunch, but I just can’t get past the rest. For this reason, the Pacers will falter. They’ll give the Heat a run for their money in the opening round if they meet up, but they won’t get beyond them. Don’t chase this big payout. If they address the bench in the offseason, then I’m all for a wager next year. This team is on the rise and coming.