OddsHQ’s Toronto Blue Jays vs New York Yankees Pick – 9/15/20: The Blue Jays have gone Over in 6 of their last 10 games, putting up 5.5 runs per game, and 6.5 runs against in that stretch. On Tuesday the Jays head to the Bronx to take on the Yankees in a pivotal series in the AL playoff race.

It’s Jays vs Yankees in a massive series in the race for the AL East #2 playoff spot. There’s a little over two weeks left in the regular season and the Yanks and Jays are neck and neck, currently sitting four games back of the Rays for the AL East lead. Toronto is 26-20 and New York is 26-21. These teams have only met in one other series so far this season, just last week with the Jays taking two of three. The Yankees won the final game of that three-game series vs. the Jays and they then prevailed in four straight at home over the Orioles, outscoring Baltimore 21-3 in the process. The Jays fell to the Mets 18-1 in the first game of their last series, but then Toronto won the next two 3-2 and 7-3.

As stated off the top, clearly this is a huge series for both teams. In their first series this year, two of three games fell “under” the number, but I think that the first game of this set will fly “over” once it’s all said and done. The average range that the total has been set over these teams last ten vs. each other is 10. The total is always set high when these teams meet, and over that ten-game game stretch, the O/U is 4-5-1. 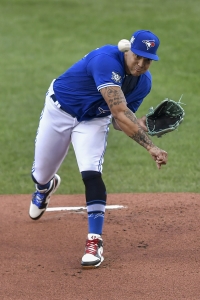 The Jays go with Taijuan Walker (2-2, 4.00 ERA), who for the most part has exceeded expectations for Toronto fans after coming over from the Mariners. Walker last faced the Yankees on Tuesday, meaning that New York has now had a “good look” at the hard-throwing right-hander. In that contest, Walker allowed two hits and five walks while striking out three. He earned a no-decision for his effort. If we dig a little deeper though, we find that Walker struggled with his control in that one, not only posting the five walks but only managing to make it across four innings. Regression seems imminent to me at some point. The Yankees were struggling mightily at the plate when Walker first saw them last week, but since then New York has definitely turned things around offensively.

New York general manager Brian Cashman held a team meeting after the second loss in Toronto last week and it clearly has helped, as the Yanks enter this series firing on all cylinders at the plate, having won five straight. Also, note that Walker is a pedestrian 0-1 with a 4.20 ERA on the road for the Jays this season. 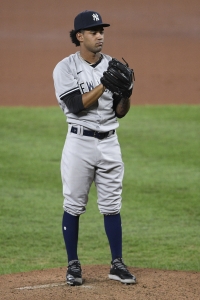 New York counters with rookie Deivi Garcia (1-1, 3.06) who beat the Blue Jays 7-2 last Wednesday. Garcia went seven innings and allowed two runs off five hits. Garcia looks like the “real deal” to me, no doubt about it, but I think the sample size is much too small at this point to draw any firm conclusions. Garcia has thrown in only three major league games and now he faces one of the most productive line-ups in the majors for the second time in less than a week. In my opinion, regression does seem imminent in this pressure-packed situation as well.

One other thing that is very interesting to note, is that these two teams have in fact seen the total go “under” the number more than having seen it go “over” this season. With the Jays sitting at 20-23-3 with their O/U for the 2020 campaign, and the Yankees at 20-23-4. Versus the division, Toronto has seen the total go 13-14-3, while New York has seen it go 14-16.

Tampa Bay isn’t out of reach of either club mathematically at this point either. The Rays have gone 5-5 in their last ten, including going just 2-2 vs. Boston over the weekend.

The stage is now definitely set for a furious finish to the AL East standings during this strange 2020 campaign. Despite the bookmakers continually setting a high total whenever these clubs meet and despite the fact that two of three went “under” in their first series, I do think that we’re set up for some offensive “fireworks” in Game 1 on Tuesday.

While New York continues to deal with significant injuries to key sluggers, the Yankees are once again mashing the ball out of the park, as evidenced by their latest series vs. the Orioles. The Jays have the firepower to hang with anyone in the league and the fact that these two talented line-ups faced these starters just last week, definitely points to a higher-scoring affair in Game 1 on Tuesday night in my opinion.