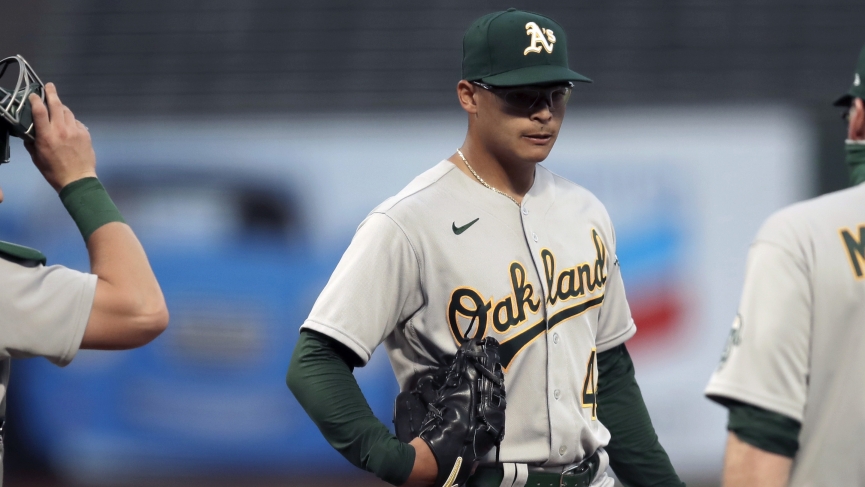 From a Friday night pick in the Freeway Series down in Los Angeles to a Saturday evening look up north at the Bay Bridge Series between the Oakland Athletics at San Francisco Giants pick. And it’s always difficult to bet on this matchup without thinking about the earthquake that rocked their 1989 World Series.

In a 2020 season that is nothing but strange, there will be an equally eerie feel to Saturday night’s clash that serves as the second game of their weekend set in San Francisco. Cardboard cutouts and ghosts from that ’89 Series will be the only fans in the Oracle Park stands when FOX begins its 7 p.m. (ET) telecast. The first pitch comes seven minutes later and is to be delivered by Giants right-hander Kevin Gausman (0-1, 4.50). Oakland was forced to shuffle its pitching plans for the weekend due to Frankie Montas coming up with a sore back, and will send lefty Sean Manaea (0-2, 9.00) to the bump in opposition.

The uncertainty with Oakland’s pitching plans kept wagering options off the overnight board for the contest. Once they’re published at FanDuel and other shops, expect the A’s to be mild chalk with a 9-run total.

Stephen Piscotty’s second grand slam of the season helped Oakland maintain the best record in the American League with an extra-inning 8-7 win in Friday’s series opener. San Francisco had a 7-2 lead entering the ninth before Piscotty’s big blow knotted matters after Matt Olson had gone deep earlier in the inning. 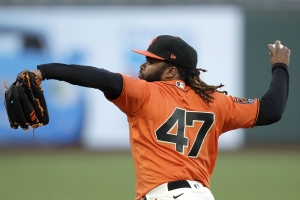 The Giants got home runs from Evan Longoria, Hunter Pence and Mike Yastrzemski to build their lead before it all came crashing down in the end. With the defeat, San Francisco fell for the fourth time in the last five games to occupy the cellar of the NL West, 6-games behind the Los Angeles Dodgers.

Friday’s result had already gone ‘over’ an 8½-run total before the A’s staged their historic rally. That went against recent trends in the rivalry, with 10 of the previous 15 matchups in San Francisco coming up short of the MLB Odds.

Losses Mounting For Both Pitchers

Manaea will be pitching on a traditional 5-day schedule even though his appearance Saturday comes one day sooner than originally planned. As the 9.00 ERA would attest, it has been a struggle so far for the 28-year-old with the A’s losing three of his four starts on the campaign. The most recent came Monday in Anaheim where Manaea couldn’t make it out of the third against the Angels in an eventual 10-9 loss.

He missed seeing the Giants during his injury-shortened 2019 season, and Oakland won three of his four starts against them on the 2016-18 schedules. Saturday will be Manaea’s second start at Oracle Park, and he won the previous outing with six innings of 2-run baseball.

The well-traveled Gausman is with his fourth MLB club in the last three seasons after signing a free-agent contract with San Francisco last December. Like Luzardo, Gausman began the season in the bullpen before making three successive starts, all three of them ending in defeat for the Giants. The 29-year-old certainly pitched well enough to get the win his last time out, working into the seventh in Los Angeles against the Dodgers and allowing just one run on three hits while striking out six. Gausman owns an impressive 23:2 strikeout-to-walk ratio in 20 innings thus far.

A 1st-round pick out of LSU in 2012 by Baltimore, Gausman hasn’t faced the Athletics since 2018 when he was with the Orioles. It was a mighty fine effort as the right-hander worked nine innings of 2-hit, shutout baseball against Oakland. Unfortunately, it wasn’t good enough for the win in what was eventually a 12-inning loss for Baltimore. All told, Gausman is 2-1 with a 2.76 ERA in four career starts vs. the A’s (26 IP).

Wind Blowing Out In San Fran

Brian Knight’s crew has been working games in the western half of the US all season, and Gabe Morales lines up to call balls and strikes on Saturday. It will be the first time in 2020 for Oakland and San Francisco pitchers to throw to his strike zone, Morales owning a 2-1-1 O/U/P record. A Bay Area native (Santa Clara) himself, totals have run 4-3 O/U when Morales has worked the plate previously at Oracle Park.

It should be mostly sunny when the game begins a little after 4 o’clock in San Francisco, with temps in the low-70s. Of most interest to baseball, bettors is the wind that will be coming out of the West at 15 mph and blowing out to the center field.

Oakland is simply too hot right now to ignore, and the momentum provided by Friday’s dramatic rally should carry over to Saturday’s tilt. I’m making my pick on the A’s to hand the Giants yet another defeat.