At 530am EST the Kia Tigers will be on the prowl after losing their past 2 series with the middling Lotte Giants coming back to town. It looks to be a perfect time to feast once again. In Game 2 we will see some heavy hitting, as the KT Wiz will look to extend their winning ways to 7 of their last 10 at home. Starting pitching for KT will be the difference when the Doosan Bears come to town. I’ll be betting both Kia, and KT F5 -0.5.

A new week is upon in the KBO. Week 5 will see the cream of the crop rise to the top. Kia Tigers have found themselves a juicy rebound spot, as the Lotte Giants come to town. Kia just faced two of the top offensive teams in the KBO being the LG Twins, and the KT Wiz. Tigers have faced two powerhouse clubs in the past two series, only generating 2 wins out of a possible 6.

During that time, Kia’s bullpen has skyrocketed to a 1.99 WHIP compared to the previous two weeks where they were at a 1.08 WHIP. Tonight should see those numbers come back to a positive regression for the Tigers. Across the board Kia leads in almost every impactful stat, not to mention sweeping this exact team just two weeks ago. Kia’s starter Im- Ki-Young was able to shut down Lotte in their first game, allowing 1 run, with a 0.62 WHIP.

Since the Giants had the great start to their campaign, they’ve become a heavy under team, going from 4.5 second half runs a game, ro 1.67. Well can the Giants bullpen at least hold teams from scoring runs? Yes, the bullpen for the Giants on the season has them top 3 in WHIP at 1.24. As you can now tell, It’s not the pitching that’s hindered the Giants, but the lack of producing runs at key times of the game. Tonight’s starter, Lotte will need all the run support he can get, as Park Se-woong was lit for 5 runs on 6 hits last time he faced this Kia Tigers team.

A closer look at tonights starters

Giants pitcher, Park Se-woong started the year with an 0-3 record, putting up a 6.50 ERA with a 1.83 WHIP. Since his shellacking against the Tigers, Se-woong has continued to give up a near 3 base on balls per game, striking out one less from last season. There will be revenge on the minds of the Giants from the sweep job, but their current form on both sides of the ball tonight does not lead me to believe so, not to mention Ki-young has owned this team in the past.

Kia’s starter Im Ki-young has turned the corner from the end of last year, where his ERA spiked close to 5. In 2020, Ki-Young’s WHIP iscurrently 1.14, and his ERA is now a respectable 3.86. The strikeouts have gone up from last year, while his base on balls average also dipped in the right direction. Last time out Ki-young went 8 innings allowing 5 hits and one run in the process. Below, I’ve put together a table that will show each pitchers analytical form.

Two pitchers moving in the opposite direction. Kia has the advantage on both sides of the ball, and that’s why I’ll be taking the Kia Tigers F5 -0.5, as they right the ship back from where they left off last. Lets continue to fade the Lotte Giants. 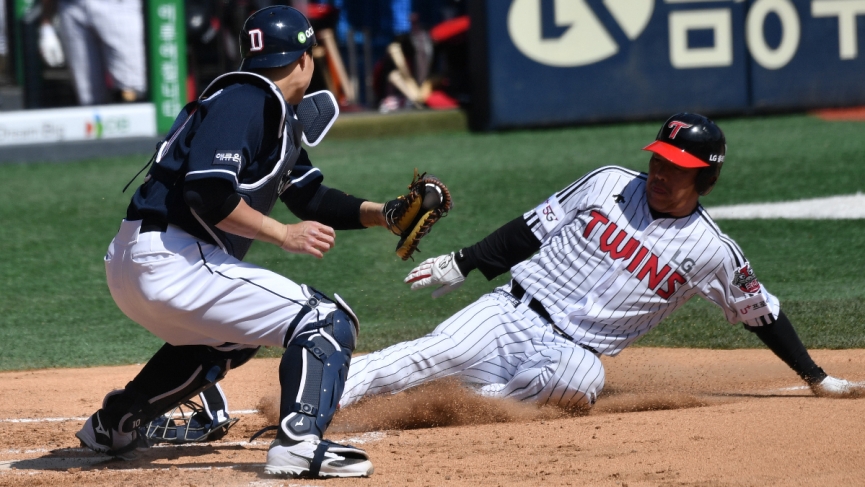 Courtesy of the Action Network

If you like runs, this is the game for you. KT and Doosan are league leaders when it comes to Batting average, and hits. Next to the LG Twins, KT and Doosan are leading the league in almost every offensive stat there is. This proves the better pitcher will take their team to victory. Doosan will start Yu Hui- Kwan, who was touched last timeout against KT. Giving up for 5 runs, on 10 hits, in just 4 innings.

Since their week one matchup, the offense has managed to maintain these impressive stats, led by former MLB’er Mel Rojas JR, who batted .409, with 6 home runs, and 38 hits. Doosan has their own louisville slugger, led by Jose Ferandez batting .468, with 23 RBI’s, and 44 hits. His numbers have led him to top 5 in all major offensive categories (excluding home runs). If you want to find the difference maker when separating these two teams, it comes down to starting pitching.

A closer look at tonights starters

Doosan will start Yu Hui-kwan, who sits 4th in starting rotation, and thrives on run support. Even though Hui-kwan has a 2-1 record don’t be fooled, his WHIP is much to be desired, as he rolls out a 1.73 WHIP on the year. Strikeout numbers are diminishing for Hui-kwan, now giving up as many base on balls as he does strikeouts, and that’s not a recipe for success.

Someone who has a little sauce on his pitches is KT Wiz starter Odrismaer Despainge. In only his first season in the KBO, Despainge has found himself in a nice little groove, leading his team to a 2-0 record. When you have a starting pitcher whose WHIP is under 1, that is someone who you want to backing in the long haul. As healthy as the Doosan Bears are, its going to be tough hitting Despaigne, who’s only allowed 2 runs in 20 innings at home. With that being said, Doosans starter Yu Hui-kwan will look to redeem himself, after lasting only 4 innings, giving up 5 runs on 10 hits. Below, I’ve put together a table that will show each pitchers analytical form.

If you’re wondering why I will not be putting my money on the KT Wiz full game, its because KT holds a below average bullpen, while Doosan have seen a dramatic improvement in the past 2 weeks. Give me the KT Wiz -0.5 , as ace Despaigne, and company take care of business early on.