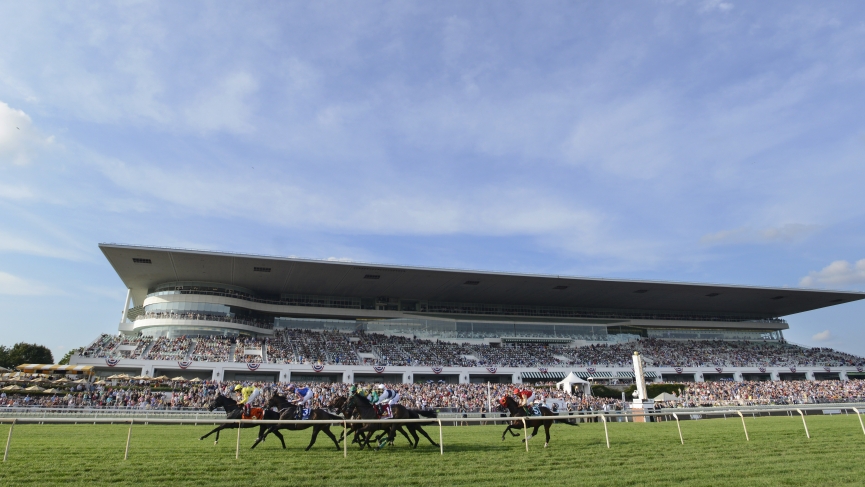 Today we have Woodbine Racetrack Picks and a best bet from Arlington. Yesterday at Kentucky Downs in the Exacta Systems Dueling Grounds Oaks, Harvey’s Lil Goil got a very confident perhaps over-confident ride when pressing the pace and was caught late by Micheline. In the Gun Runner – Dueling Grounds Derby Moon, Over Miami got in from the also eligibles list and was able to run down stubborn long shot Big Dreaming. Meanwhile race favorite Bama Breeze showed little.

At Emerald, Anothertwistafate proved that a 16-month layoff was a non-issue in winning the grade three Longacres Mile. The important part is he showed he could rate while doing it and expect to see him in bigger races in the near future. Let’s look at some races:

The Woodbine 2nd is a $10,000 maiden claimer for three-year-olds and up going 6 ½ furlongs on synthetic. Morning line favorite A Gershwin Tune comes out of the same race as several of the horses where Tall Water, who also runs, was better in second. A Gershwin Tune typically runs well while settling for a minor award, has no tactical or class edge thus I’m against.

I would not be surprised to see Tall Water finish in front of A Gershwin Tune again. My issue with Tall Water is his two best races have both come at six furlongs and note he was 18-1 and 44-1 in those races. He could be a fraction of that today and none of his races past six furlongs are particularly appealing.

The intriguing horse out of that race is Calling Bear who performed okay in considering it was his debut and he had post 13. Obviously he has to improve and I would give him more consideration If I liked that race more.

Perhaps Give Me an Eye can win now that he competes at his lowest evaluation to date but he has to deal with the outermost post and it’s not like he’s been competitive recently.

The horse I want is Mr. Todd (5-1 ML) who ran well in his debut at seven furlongs against $25,000 competition. He then stretched out to nine furlongs, was used for speed and understandably tired. Last time while again trying a route, this time on turf, he had the rail and was once again used for speed. Today he gets to sprint for the first time since his debut against easier competition and thus I’m expecting a stronger result.

The Woodbine 5th is a maiden allowance for fillies and mares three-year-olds and up going 1 1/16 miles on synthetic. Saratoga Vision is going to take plenty of money despite the fact she is 0 for 13. A large reason why is that she runs in five stakes, three of which were graded including a grade one, and has not disgraced herself. In fact, two starts ago she was second at 84-1 in the grade three Selene. Some of her maiden races included the likes of Merveilleux and Afleet Katherine who came back to run 2-3 in the Woodbine Oaks. Now of course she also has a few maiden races that she probably should’ve won and don’t view her form from the maiden races and stakes are all that different. I would not treat her as a standout.

I prefer Keepme in Thegame (4-1 ML) who competed in New York last year and ran in maiden races that featured horses such as Magic Star and Catch a Bid who are both now stakes winners. Keepme in Thegame now competes at Woodbine and last time tried both synthetic and nine furlongs for the initial time. She was covered up most of the way and never really got clear to make a run. Note the winner was graded stakes-placed so that is another strong reference. Blinkers are added and see her getting the jump on the favorite turning for home.

Arlington 2nd: Release the Heat can make all 3:35pm Et

The Arlington 2nd is a $5,000 claimer for fillies and mares three years old and up who have not won two races going six furlongs on synthetic. None of the horses who will attempt an off pace approach have appeal and that includes morning-line favorite Rare Action Attack who was an okay second last time at this level. The issues with her are she is 1 for 21 and her lone win came on the turf which appears to be her preferred surface.

Perhaps Present of Hero who broke her maiden last time while trying synthetic for the first time, will win again but think she just beat easier last time and doesn’t trust her to replicate a career effort.

The horse I prefer is Release the Heat (7/2 ML). The handicap appears very simple with her as she will either get in front of Rend Lake Baby and wire this field or she won’t and likely finish last. Consider both horses broke their maiden’s at Arlington but Release the Heat did it at a higher level. Today Release the Heat drops to her lowest evaluation to date, I think she gets to the front and wires this field.