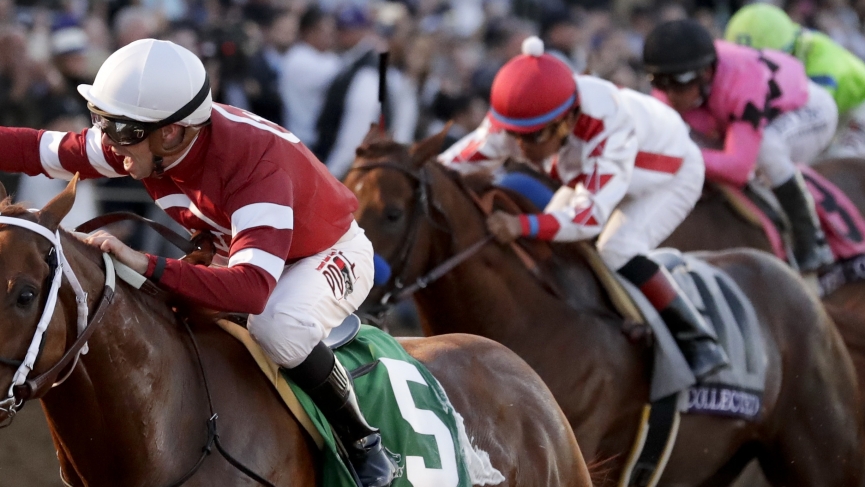 Volatile benefited from the scratch of Lexitonian to wire the Vanderbilt in the other stake at Saratoga and Laura’s Light delivered as the favourite in the San Clemente at Del Mar.

At Woodbine Shirl’s Speight showed he is all class handling the stretch out on a new surface while pressing a solid early pace in the Marine. For whatever reason, Owlette was rated in the Selene allowing Two Sixty to set the pace and wire the field at 8-1.

Today Lone Star and Ruidoso both have multiple stakes while the graded stakes action continues at Woodbine, Saratoga and Del Mar. Let’s look at some races:

The Saratoga 8th is an allowance for horses three years old and up going 1 1/8 miles on dirt. Its possible morning-line favourite Happy Saver might be a superstar as his debut was stellar and he’s bred to stretch out. For this race, however, he lacks seasoning and still needs to actually prove he can stretch out. His price will likely be too short to find out how good he really is.

I don’t want High Amplitude who makes his first start in four months. His last three races all at Aqueduct look the same to me and he disappointed in the last two as a significant favourite. This field appears much tougher and his lone win came on the lead something he won’t get today.

There are two alternatives. Beau Luminarie is one as he is clearly a route horse with his route races being light years better than his sprints. Last time competing at today’s distance at Churchill Downs, he had to contend with a moderate early pace while going five wide on the turn. The favourite was closer to that moderate pace and was able to get through on the rail saving all the ground. If you want a closer, he appears like the choice.

The horse I want however is Summer Kid (8-1 ML). He has indicated good tactical speed in both his races. Last time in his maiden win he had to wait for running room which he did patiently, angled out and kicked clear to be a decisive winner at Gulfstream. His trainer has started one horse at Saratoga who also last ran at Gulfstream. It was Caracaro who finished a game second in the grade three Peter Pan.

The Saratoga 9th is the grade two Bernard Baruch for three-year-olds and up going 1 1/16 miles on the inner turf. I’m against Halladay who looked good winning back to back races at Gulfstream in the spring. My issue with him is that both those races had plenty of early speed yet he found himself left alone on the front end. This aided him while compromising his competition and of those dressed up performances I want to play against him. Especially considering the presence of Somelikeithotbrown who might be faster early and considering how well he runs on the lead, I don’t see him conceding to Halladay.

The logical alternatives come from the Chad Brown stable including your slight morning-line favourite Good Governance. My issue with Good Governance is from a Beyer speed figure perspective, he’s the slowest horse in the race. Granted he has had the fewest chances (3) and has plenty of upside. If he goes off favoured however that bet will be on potential and nothing he’s actually done. Note his lone other attempts in a graded stake he was sent off at odds on, made the lead in the stretch and managed to get caught.

The horse I want is his stablemate Olympico who won off a similar layoff as today last year when he took the grade three Fort Marcy. He appears like the best closer in this race and new rider Joel Rosario should fit him perfectly. Slight concern that this distance is slightly shorter than his best but he certainly is talented enough and his price should be fair.

The Del Mar 8th is the grade two Eddie Read for three-year-olds and up going 1 1/8 miles on turf. Perhaps morning-line favourite United can win as he won his only start at this distance and it came at Del Mar. That race, however, was against easier and his best work has come at longer distances including when he was ahead from upsetting the 1 ½ miles Breeders’ Cup Turf at 51-1. Without a race at today’s distance that makes him a standout, I’m inclined to play against.

Not interested in Originaire who always seems to come up short when stepping up in class. He has finished in front of and behind Neptune’s Storm in several previous races. Perhaps Neptune’s Storm can wire this field as the speed but if everyone brings their best effort, his isn’t good enough.

Bowies Hero won this race last year and perhaps he can win again but it was his only win at today’s distance in six attempts and I’m convinced his best distance is one mile.

The horse I want is Sharp Samurai (5-1 ML). Throwing out his last race where he was an okay third. Consider it was his first race in over 10 months and he can move forward off that effort. He has finished second and fourth in this race the last two years and has proven himself at Del Mar and at today’s distance multiple times previously.