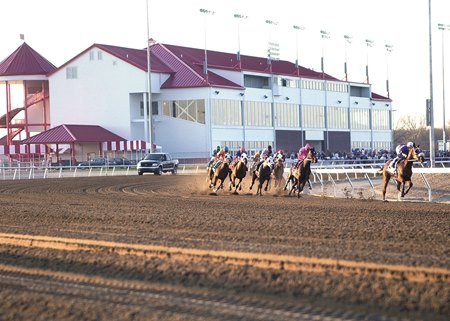 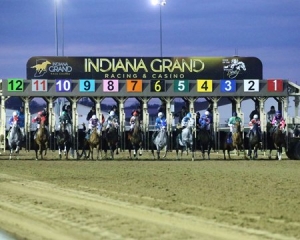 Yesterday at Kentucky Downs, Theodora B. Went wire to wire to win the TVG stakes defeating favorite Mrs. Sippy. That is now back to back stakes wins for Theodora B. and both have come on the front end.  Emro rallied from off the pace to beat long shot Taylor’s Tourist in the Untapable. Kimari who was cross-entered in several stakes ended up choosing the Music City and disappointed as the favorite. Lighthouse got the jump on everyone to pull the upset.

Today, the short Kentucky Downs meet ends and Indiana has a pair of restricted stakes. Let’s look at some races:

The Kentucky Downs 9th is the grade three Franklin-Simpson for two-year-olds going 6 ½ furlongs on turf. Morning line favorite Kimari will scratch after running yesterday which means also eligible Competitive Saint will draw in.

I’m against Turned Aside who may end up inheriting favoritism. His last race was very good but considering he had a great trip while the favorite that day had a miserable trip. I don’t want Turned Aside at a short price off a race where everything went his way.

I’m also against Maven who went off as the favorite in the Mahony and disappointed. The issue isn’t that he lost the race but rather that he didn’t show his customary early speed and was flat throughout. Even if he returns to form, he’ll have to deal with Johnny Unleashed early and he is trying his longest distance to date.

One alternative is Another Miracle who won a stake at Monmouth last time when adding blinkers. Thought blinkers helped him and his two-year-old turf form was solid but he does have to improve to win this race.

The horse I want is Competitive Saint (8-1 ML) who did well to beat older horses in just his second career start. Last time he ran into the inform Jack and Noah and still rallied well to be second. Note he was much better than Maven that day. Have seen continued progress in all of his starts and he would only need minor improvement to be considered a strong factor in this spot.

The Indiana 8th is the Gus Grissom for Indiana breds three-year-olds and up going 1 1/16 miles on dirt. I’m against the classy old veteran Operation Stevie who is a stone-cold closer in a race that doesn’t have a lot of early speed.

Unbridled Beast was stellar last time winning by five lengths and he improved to 2 for 2 when going a route. A repeat of that effort would likely get him to the winner’s circle but you have to wonder where it came from as that race is much better than anything he had done previously. I’ll let him beat me repeating that last effort.

The horse I want is Uphold (10-1 ML) who provided a strong effort two starts ago off a 10-month layoff when beating state restricted foes. He could not back up that performance last time but has rebounded from poor efforts before. Note that all four of his wins have come on the Indiana Grand dirt and he has predominantly run against the open company while his rivals have stuck to easier state restricted competition. Making the third start of his form cycle, expecting a peak effort from Uphold.

The Canterbury 4th is an optional claimer for three-year-olds and up going 7 ½ furlongs on turf. Morning line favorite Cinco Star did well three starts ago on the Canterbury turf wiring a restricted stake. Perhaps he can do it again, but I’d expect him to take a lot more early pressure from the likes of Noble Egyptian and Skippy’s Strike.

Noble Egyptian will probably take some money as he always does and he did win last time though it was against easier. I don’t want him now that he steps up in class.

Giant Payday has plenty of races that can win today and he didn’t have to love the moisture in the ground last time. He should appreciate not seeing Tut’s Revenge as he has lost to that horse in his last two races and note Tut’s Revenge has currently won four in a row. My issue with Giant Payday is the ‘second-itis’ as he has just four wins compared to eight-second place efforts and a lot of those minor awards have been by very small margins.

The horse I want is Tin Badge (9/2 ML) who has only tried turf twice including two starts ago when trying the Canterbury turf for the first time. In that race, he was the only horse to make a strong rally from off the pace and he was able to run down the pacesetter. Note the third-place finisher was over 10 lengths behind thus it was a strong effort. A repeat of that effort can make him 2 for 2 on the Canterbury green.