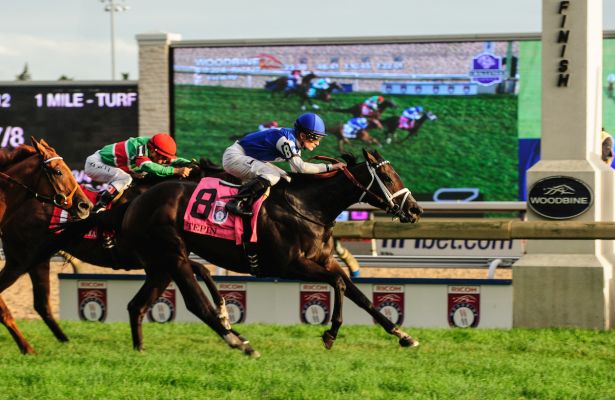 Odds.com’s Horse Racing Picks for Oct. 15th: Yesterday at Monmouth, Premier Star delivered as the favorite in the Jersey Shore and As Seen On Tv proved he can’t run anymore. Today, Woodbine begins a new week while Keeneland continues theirs. The stake feature at Keeneland, the grade three Sycamore, I am not against Aquaphobia for trainer Michael Maker as he won the grade one United Nations two starts back and didn’t have to love the soft turf last time. Ziyad who has been running in group events in France also deserves a long look. Red Knight who took plenty of action last time, is a play against as he ran very well that day but after 20-lifetime races; it’s the type of effort I’d rather watch him repeat. The other Maker horse, Big Agenda would be the longshot look as he has shown improvement in his last two races since Maker took over his training. Let’s look at some races:

The Keeneland 2nd is a $20,000 claimer for three-year-olds and up that have not won three races going 1 1/16 miles on dirt. I am against heavy morning-line favorite Social Afleet who has competed at this level twice recently and settled for minor awards. Note both his wins have come in restricted events at Fair Grounds and his lone try at Keeneland is below his best. Also, he has no class edge or tactical edge. He likely takes money based on the Beyer Speed Figure he earned last time which would win this race but it is also the best figure he has ever earned and at a short price, I’ll let him beat me if he can repeat it.

Of the entry consisting of American Joey and Afleet Moment, American Joey has some appeal having won two straight albeit against easier at Mountaineer. Note however he has run at Keeneland previously and has a pair of seconds from three tries. He has to improve and not sure what his odds will be being part of an entry but warrants some consideration.

Forloveofcountry is one to consider especially if there is inclement weather as the best race he has ever run was over a sloppy track at Churchill. Recently however he has tried turf, synthetic and last time dirt at this level where he did no running. Perhaps he rebounds in this spot but his current form is hard to trust.

The horse I prefer is Majors Vindication (4-1 ML) who is somewhat camera shy but did win three starts ago. Throw out his Ellis Park race two starts ago and his last start at Oaklawn and you have very consistent form. Race shape this race and he projects a great trip just behind the leaders while being able to get the jump on the favorite turning for home.

The Keeneland 7th is an allowance for three-year-olds and up going 1 3/16 miles on dirt. Perhaps morning-line favorite Spa City can win and if he performs the way he did when breaking his maiden two starts ago, he likely will. My issue with him is that win came eight months ago and after that, he tried the grade two Tampa Bay Derby and did not perform well. Now he is off a six-month layoff and only the maiden win would make him favored thus I’ll play against.

Letmeno is a threat to wire this field as he did two starts ago in the Iowa derby before being –wrongfully- disqualified. He did not have a good beginning last time at Laurel so you can throw out that race. The main issue with him is outside the Iowa Derby, he doesn’t have many races that make him appealing and he has had his chances.

Don Bourbon and Glory Road (5-1 ML) both come out of the same race where I prefer the latter. Both horses had minor problems in the early portion of the race and Don Bourbon was slightly better when finishing second by a head. Consider however Don Bourbon has routed plenty of times before whereas Glory Road was going two turns and by far his longest distance to date in just his third career start. Glory Road, therefore, offers more upside, and with that experience under his belt, he should step forward in this spot. The Woodbine 6th is an optional claiming event for three-year-olds and up going 7 ½ furlongs on synthetic. I am against morning-line favorite Finalist who was able to break through last time when being left alone on the front end going a much farther distance. I don’t see him getting to the front with Silence Breakers in this race thus different tactics will be needed. Note off that win, the connections don’t raise the evaluation and leave him in for the claiming tag.

Tricky Magician has plenty of races that would be competitive in this spot but is camera shy with two wins and six seconds. He also has yet to win on the Woodbine turf in seven tries but has run well on the surface as indicated by his four second-place efforts. He’s hard to trust for the win but consider him a must use in exotics underneath.

Lucas n’ Lori, Doctor Uptown, and Silence Breakers all come out of the same race. I am against Lucas n’ Lori who got a perfect trip saving ground and angling out in the stretch. He is never supposed to lose second in that race to Doctor Uptown. Doctor Uptown also saved ground and did well to get second at 42-1 but that may have also have been his best race to date and he’ll need to repeat it, if not exceed it to win at a much shorter price.

The horse I prefer is Silence Breakers (6-1 ML) who last time was trying a route and 2-turns for the first time and set a pace that didn’t hold together. He is once again fast enough to set the pace, should appreciate the slight cut back in distance and with that first route race under his belt, he can be more thorough in this spot.