Long shots lead the way at Churchill Downs on Saturday leading to more than $100,000 being carried over into the late pick 5 on Sunday. The Sunday feature is the grade 2 Santa Maria at Santa Anita where Ce Ce and Hard Not To Love renew their rivalry. Let’s take a look at some races.

Churchill 4th: Give Seahawk Lisa another chance on Turf

The Churchill 4th is a $50,000 claiming race for 3-year-old fillies going 1 1/16 miles on turf where I’m not enamoured with anyone.  Swanage and Omnia both broke their maidens on turf on the front end. Those  2 along with New Day Dawning and possible even morning line favourite Ginseng can ensure a contested early pace. Ginseng can win but she has settled for 2nd in each of her last 3 races. Dixie Mo has to prove herself routing and she won a turf sprint at Gulfstream last time that nobody wanted to win.

I’m not against Hey Kitten who broke her maiden when dropping out of Maiden Allowance races. She can make it 2 for 2 when running for a tag but she does have to work out a trip from post 10 and she did lose at 8/5 last time.

I want to give Seahawk Lisa (15-1 ML) one more chance on turf. After breaking her maiden as a 2-year-old, they moved her to turf and she finished 3rd behind the 2 favourites in her first try against winners. She then tried the grade 3 Jimmy Durante where she was over 100-1 and the winner went undefeated as a 2-year-old.

After a 3 month break, she returned on dirt at Oaklawn where there is no turf course. All 3 of her races there were against better horses. The races 2 and 3 back provided multiple next out winners and last out she faced Gamine who could be a superstar. Now at Churchill, Seahawk Lisa is immediately put back on turf where she can show more in her 3rd career turf start.

Churchill 6th: Whoville may be capable

The Churchill Downs 6th is a $20,000 maiden claiming event for fillies and mares where it’s hard to trust morning line favourite Every Single Day off her last race. Every Single Day dropped to her lowest evaluation to date last time and was sent off at 2-1. 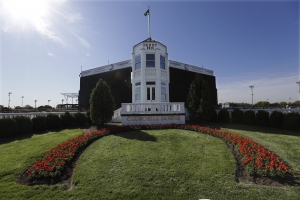 She finished a well-beaten 6th never providing a rally. She has tried sprinting and routing on both dirt and turf and with all the different types of races the connections have put her in, it tells me they aren’t sure what she’s best at.

None of the horses making their debut intrigue me which leaves me with those with experience. One option is Azlynn’s Dreamer who took a step forward last time making the first move before being caught late by a closer. She did finish 8 ½ lengths clear of the 3rd place finisher and a similar effort may just be good enough.

The horse I’m most interested in is Whoville (10-1 ML) who just might be fast enough to take the lead and early speed is usually an asset in a race like this. This appears to be her easiest assessment to date lowering the price tag from $50,000 to $20,000. Her one attempt for $25,000 she was in tight against the rail while trying to challenge the favourite for the lead and she eventually flattened and settled for 4th. A similar effort here might put her in the winner’s circle at a fair price.

The Gulfstream 8th is an allowance optional claiming race for horses 4 years old and upward going 6 furlongs on dirt and it has several speed types from the likes of Royal Squeeze and Running for Riz making me want to look at the closers. I’m against First Deal whose best races have come at Monmouth and he is coming out of quarantine after being trained by Jorge Navarro.

Meanwhile, Frosted Grace is winless on wet tracks so getting back to a dry track today should help his cause. Also, there was a bias that day that favoured horses that were on the outside and Where Paradise Lay with his outside post was able to take full advantage. Frosted Grace was stuck on the inside and it wasn’t until he was last and was able to make his way to the outside did he come with a rally. With no rain and a fairer racetrack, Frosted Grace (7/2 ML) can turn the tables and win the Gulfstream 8th.