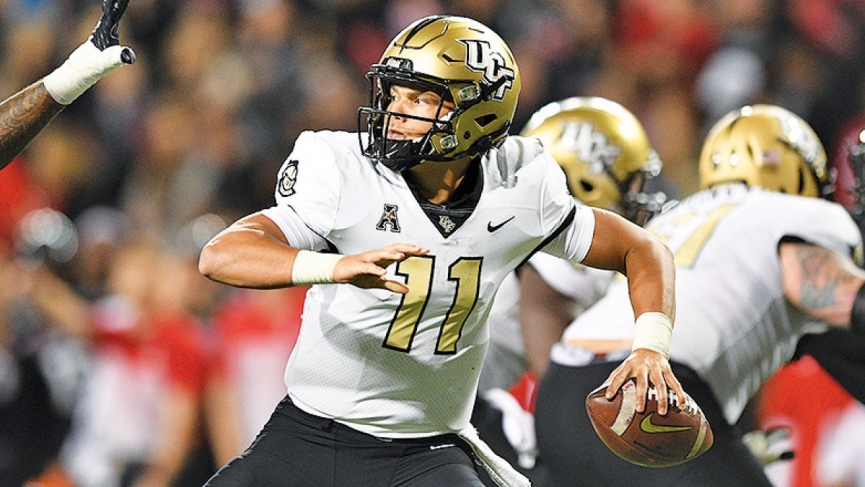 Odds.com’s UCF vs Georgia Tech Pick for College Football Week 3: The road team and the Under is a perfect 4-0 in the last 4 meetings between UCF and Georgia Tech. However, John Ryan has a first half over trend, that has hit at a 77% rate over the last five years. It’s Knights vs Yellow Jackets. Saturday College Football Picks.

The No 14 UCF Knights will take to the field for the first time in the 2020 season. The Georgia Tech Yellow Jackets went into Tallahassee as a 13-point underdog and upset the Florida State Seminoles 16-13. Their confidence will be high knowing they have another opportunity to upset a ranked opponent in the Knights. The Jackets find themselves installed as 7.5-point home underdogs with a total of 63-points. These lines imply a final score of 35-28 with the Knights winning.

Returning Starters Are a Huge Asset for the Jackets

The Jackets return nine offensive and 10 defensive starters. The biggest story coming out of last week’s win is all about the superior play of freshman quarterback Curtis Sims, who became the first-ever freshman QB to win a season opener and is the first fresh to start at Georgia Tech since Reggie Ball did in the 2003 season. He performed more like an experienced senior throwing for 277 passing yards on 24 completions, which is the highest since 2003. So, with all five offensive linemen back Sims will get solid protection and run blocking from this experienced unit and that is a major advantage for the Jackets in this matchup.

The defense is an even bigger story for the Jackets having held the Seminoles to just 307 total yards and 3.8 yards-per-play. The unit also forced three turnovers with their aggressive hard-hitting play. Linebacker Quez Jackson had an interception and led the team with nine tackles including 7 solo tackles. One fumble was forced and recovered by LB David Curry, who also had seven total tackles including four solo ones. The second fumble was recovered by defensive lineman Djimon Brooks, who also had three total tackles. There were three additional fumbles forced, but the Seminoles managed to recover them. In case you wanted to know, the most fumbles the Seminoles have had in a game is 7, and fumbles lost is 4 in all games played since 1990.

The Jacket defense played with a disciplined focus and was never caught out of position throughout the entire game. Head Coach Geoff Collins knows this is a solid recipe to contain the UCF juggernaut offense.

This betting system has earned an amazing 59-25 against-the-spread (ATS) record for 76% winning tickets over the last 30 seasons. The system instructs us to be on home dogs of 3.5 to 9.5 points that are facing an opponent in the first four weeks of the season that won their last three games of the previous season.

For the First Half Bettor

For those of you, who enjoy betting each half of a football game here is a betting system you are sure to love. It is a total betting system that has earned a 37-10 ‘OVER’ record for 77% winning bets over the last five seasons. The system identifies an ‘OVER’ first-half bet with any team in the first four weeks of the regular seasons and had four or more losses in their last five games last season and is a matchup between two teams that both have returned eight or more offensive starters from their last season.

The key to this game and for the Jackets to cover the spread is to keep UCF from scoring more than 28 points and not get into a shoot-out with them. In past games, in which the Jacks and their opponent both score 27 or more points they have gone a dismal 1-9 ATS for 10% winning bets. The 28-point level is a pivot point for the majority of NCAAF teams and not just for this matchup.

The projections call for the Jackets to score 27 or more points and have at least 5 more first downs than the Knights. In games played in which the Jackets scored 27 or more points and had more than 5 first downs than their opponent have seen them go on to record a 49-4 SU record and 40-11 ATS mark good for 78% winning bets that covered the spread by an average of 10.3 points. Take the Georgia Tech Yellow Jackets plus the points. The best price currently on Georgia Tech is +8 (-114) via BetRivers