Odds.com’s Tennessee vs Georgia Pick – College Football Week 6: Between the Hedges, we go looking for a winning pick when No. 14 Tennessee travels to face No. 3 Georgia. 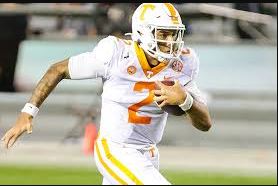 Another week, another couple of top 25 matchups down in the SEC. That isn’t hard to do when a conference has a half-dozen squads occupying the conventional polls, and this confrontation carries some huge implications for who represents the East Division of the SEC Championship as a pair of unbeaten battle in Georgia where the No. 3 Bulldogs host the No. 14 Tennessee Volunteers.

Depending on what has taken place in the Florida-Texas A&M game that begins at noon, this could be for sole possession of first in the division by the time the Volunteers and Bulldogs boot their clash at little past 3:30 p.m. (ET). A crowd of 20,000 or so is expected inside Sanford Stadium in Athens, and CBS will carry the broadcast for the rest of us.

Tennessee and Georgia are 11 slots apart in the latest AP rankings, and that’s just about the same margin between them at FanDuel where the Bulldogs are giving up 11½ points after opening a field goal higher. Saturday’s scoreboard target has also dropped a bit, currently selling at 42½ after being initially offered a point higher.

Now in his third season running the show in Knoxville, Jeremy Pruitt is trying to elevate Tennessee back up to elite status in the SEC. The Volunteers haven’t made it to the conference title tilt since 2007, and they’re seeking just their second win at Sanford Stadium since 2006.

Defense has been prevalent in the first two victories that gave Tennessee the nation’s longest active win streak with eight. The Volunteers came up with two timely turnovers in a 31-27 decision at South Carolina to open the campaign and overpowered Missouri a week ago in a 35-12 final. The stop unit should also have corner Bryce Thompson back at full speed after the junior was limited in the win over the Tigers last Saturday.

The good news on offense is Tennessee hasn’t turned the ball over in the first two games, joining Kansas State as the only teams that have played at least two games to accomplish that. More good news is after sputtering a bit against the Gamecocks, the Volunteers were far more consistent in the victory over Missouri that easily covered the 10-point betting spread. Senior QB Jarrett Guarantano enjoyed the luxury of relying on his ground game in the win, which will be difficult against a stingy Bulldogs defense.

Having been to the SEC Championship each of the past three seasons, and winning one, Kirby Smart might have the team to get over that final hump and win Georgia’s first National Championship in 40 years. The Bulldogs have certainly played like champions in dominating their first two opponents, Arkansas and Auburn.

Georgia controlled then-No. 7 Auburn last weekend from start to finish, shooting out to a 24-0 lead and then coasting the rest of the way to the 27-6 victory. Minor injuries to QB Stetson Bennett (hand) and right tackle Warren McClendon (cramps) may have played a role in the Bulldogs only scoring three points over the final 38 minutes of the game, but both are expected back for this week’s game.

As we’ve come to expect from Georgia since Smart arrived on the scene four seasons ago, the defense is the team’s strength. The Bulldogs rank third in the country in run defense, and fourth in both scoring and total defense. The unit has also picked off four passes, and come away with five sacks in the first two games.

Dawgs Can Even Rivalry With A Win

You won’t find a rivalry much closer than this one as Tennessee holds a 24-23 edge over Georgia, two more matchups ending in deadlock. The pendulum has been swinging more in favor of the Bulldogs in recent years, however, as Georgia has won the last three meetings and taken eight of the last 10.

Last year’s collision in Knoxville was a lopsided 43-14 decision in favor of the Bulldogs. Georgia covered the 24-point NCAAF odds, and the final slipped past a 51-point total. Two years ago in Athens, the Bulldogs also enjoyed a relatively easy time in a 38-12 triumph, though it wasn’t enough to cover the 30½ points UGA backers were laying. That contest fell short of a 55-point total, ending a string of 4-straight ‘over’ winners Between the Hedges.

Thanks in part to another storm out in the Gulf of Mexico, there is rain in Saturday’s forecast. It isn’t expected to be a lot, but could still make for some sloppy conditions at Sanford Stadium. I’m still inclined to believe the Bulldogs can cover for my free college football pick. Georgia takes this one, 28-13.