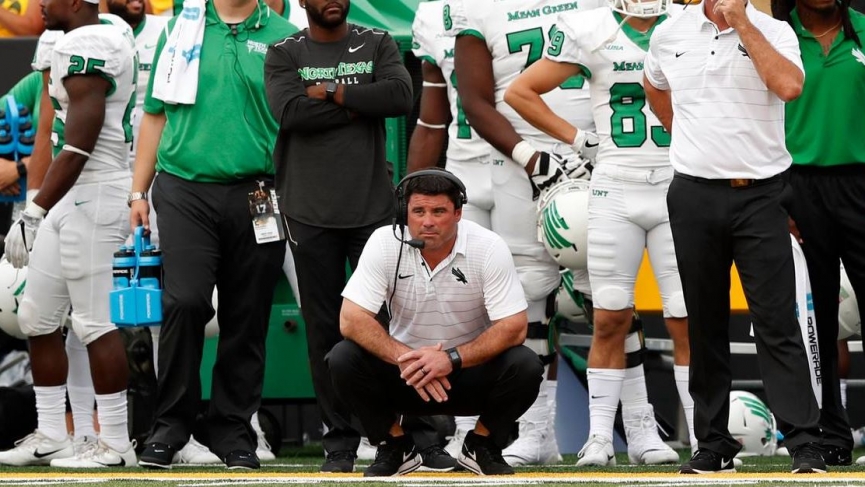 Myrtle Beach Bowl Prediction | North Texas vs Appalachian State Pick: North Texas and Head Coach Seth Littrell are 1-2 ATS in bowl games, and have yet to pick up an outright win since Littrell was hired back in 2016. The Mean Green are +21 point underdogs to Appalachian State, in the first bowl game of the 2020 season on Monday afternoon at the Myrtle Beach Bowl at Brooks Stadium in Conway, South Carolina.

Appalachian State are 2-8 ATS as the betting favorite in 2020, and had an average moneyline of -830 in the 8 games in which they won outright. The Mountaineers dropped two games outright as the favorite, losing 17-7 to Marshall (+175) in their second game of the season, and dropping a 24-21 game in early December to Louisiana (+135).

North Texas went 1-3 straight-up as the dog in 2020, losing by an average of 18.2 points per game, even when factoring in their 52-35 upset win over Middle Tennessee State in October. That win would be the only game in which the Mean Green managed to cover as the dog, as they went 1-3 ATS when getting the points on the spread this season.

Based on the measure of expectation this season, you have to give a bit of an edge to North Texas in this match-up. Strictly from a number stand-point, the Mountaineers have performed so poorly as the betting chalk this season, that the only real way to back this team in this game would be by getting involved on the live betting line if they fall behind, or fail to put up the margin that’s expected going into the 2nd-half.

North Texas haven’t had a pretty season themselves, and are likely going to lose this game outright, but the spread may be a different story. If you’re going to back the Green here, it may be best to wait until this line swells a little bit further, as the money has come in on the Mountaineers, pushing this number from the opening line of -19 up to -21.

It’s hard to put any kind of investment behind this UNT team that has looked atrocious over nine games this season, even in their wins they haven’t been very impressive. However, you’re getting a whole lot of the same from an Appalachian State squad who have even bigger expectations as -21 point favorites in a bowl game.

North Texas starting quarterback Austin Aune will not play in this game due to an undisclosed injury. The Green put up an average of 284.8 yard passing this season, but Aune failed to put up more than 200 yards per game in 2 of his last 3 games. We’ve seen this before in bowl games many times. A starting QB will be either opt-out for whatever reason, causing the market to react and come in on the other side. What we’ve also seen in this situation is a back-up QB step in and look as good, or even better than the starter. Sometimes, addition by subtraction can be an overlooked angle.

Appalachian State have injuries issues of their own. RB Deatrich Harrington is out for the season with an undisclosed injury, while fellow RB Marcus Williams Jr. is questionable for Tuesdays game. The injuries are a significant blow to the Mountaineers offense, as Williams and Harrington were a pivitol part of them averaging 243.6 rushing yards per game this season. Even if Williams Jr does play, there has been a significant drop in his production over the last three games, averaging just 3 yards per carry.

As for the total, this one currently sits at 66 and that may be a little bit too high. If the market comes in on the Under throughout the day, you may be able to get a 64.5 or 65, but otherwise, it’s probably Under or pass. App State have only allowed 19.3 points per game on defense this season, and might not allow many points against a back-up QB.

This game will likely be a blow out, but there is probably still some value on North Texas if this number gets any higher than +21. The back door will remain open if we see a situation where App State lead by 28 or 24 in the 4th quarter. This is definitely a game where motivation will be a huge factor, and the Mountaineers might not have much reason to put up margin on North Texas if they lead by a reasonable amount at the end of the game. This one screams 42-21, a blow-out, but a UNT cover.