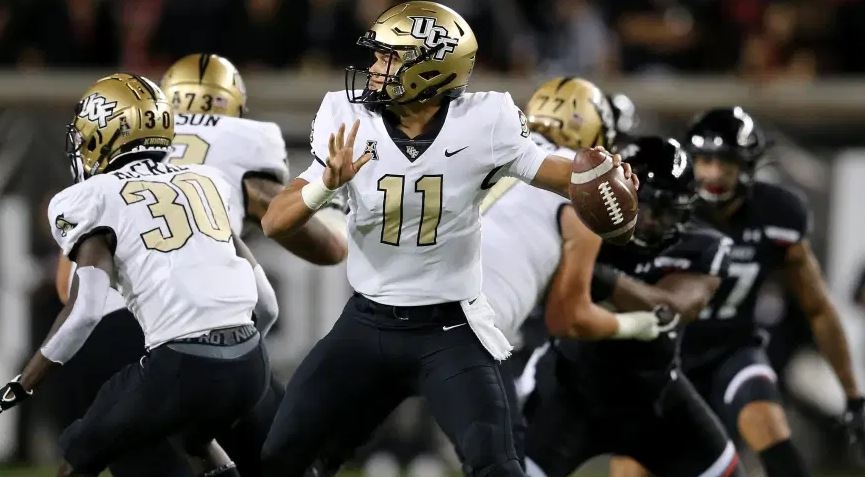 Cincinnati vs UCF Pick – College Football Week 12: Luke Fickell can’t afford to let his Cincinnati team start thinking ahead to the possibility of inclusion in the College Football Playoffs. Those odds are long, even with a perfect campaign which will be difficult enough for the Bearcats with three road games to close the regular season. The first of those away tilts takes place this Saturday at the UCF Knights.

Cincinnati continued its march towards perfection with an easy 55-17 rout of East Carolina last Friday. Desmond Ridder starred with three touchdown passes and another score on a 7-yard run as the Bearcats ran up a season-best 654 yards of offense. As shiny as those numbers were, it was the defense once again leading things and starting a 28-point second quarter with a Pick 6. Cincinnati’s stop unit is third in the country holding opponents to 12.4 PPG, and 10th limiting them to just over 300 yards a contest.

Picked to win the American Athletic Conference, Josh Heupel’s Knights stumbled with a 2-game skid last month but appear to have recovered following a 3rd-straight win. The 38-13 final against Temple wasn’t enough to cover the 28½ that UCF backers were giving up on the NCAA football odds, but the game wasn’t really as close as that final suggests. Central Florida built a 21-0 lead in the first quarter, and scored touchdowns after each of Temple’s three turnovers.

Still a rivalry in the making, UCF has a 3-2 lead in the series that only began five years ago. Last year’s matchup in Cincinnati saw the Bearcats come away with a mild 27-24 upset, and marked the fourth ‘under’ in the series. The Knights have won and covered both of the previous meetings at the Bounce House in Orlando, where a mostly sunny afternoon with the thermometer climbing towards 80° is expected. This is the proverbial immovable object (Cincinnati’s defense) against the unstoppable force (UCF’s offense), and I’m going to take the points with my free college football pick.