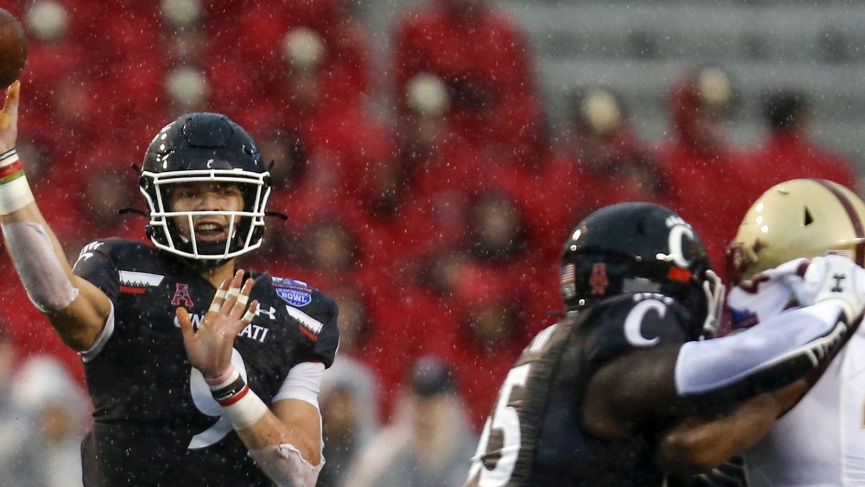 Well, that didn’t take long. Luke Fickell inherited a 4-8 Cincinnati football team after the 2016 season and, following a 4-8 get-acquainted showing of his own, has directed the Bearcats to consecutive 11-win seasons the past two years. He would love to take the next step and get UC to the same national level as the big boys, but that’s out of his hands playing in the American Athletic Conference.

Fickell is entering his fourth season, meaning it’s the end of the road for much of his initial recruiting class. The Bearcats will have a lot of seniors and redshirt juniors on the turf, a positive turn of events with spring practices cut short and the uncertainty surrounding when and how long summer sessions will take place. Having about three-quarters of the roster back means Fickell and his staff know what they have in hand.

Not that it means a hill of beans for the folks setting college football futures. The pig skinners from Porkopolis are way back in the pack as no better than 150/1 longshots to win the College Football Playoffs.

Desmond Ridder will be directing the offense for a second full season, and while providing a dual threat as a decent runner, needs to take his passing game up a least a notch. He actually took a bit of a step back in that department last season, due in part to a shoulder injury that kept him out of the loss at Memphis in the regular-season finale.

Ben Bryant backed Ridder up as a redshirt freshman a year ago, but both will eventually be pushed by homegrown Cincy recruit Evan Prater, one of the best recruits to land outside the Power 5 in this class.

Offensive coordinator Mike Denbrock needs to break in new faces at the skill positions. Cincinnati lost top running back Michael Warren II, who signed with the Philadelphia Eagles after the NFL Draft, and five of its top seven receivers, one of those TE Josiah Deguara, a 3rd-round pick by Green Bay. 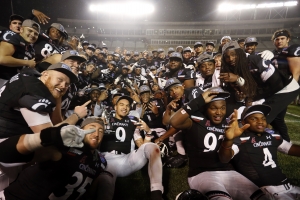 Gerrid Doaks is penciled in as the lead tailback, but keep an eye on Jerome Ford, a former 4-star recruit who has been at Alabama before transferring to the Bearcats with immediate eligibility. Alec Pierce led the team in receptions and receiving yards, but it’s wide open behind him among the pass catchers.

While the line play was a shortcoming last year, Cincinnati’s big uglies upfront should be better this time. Former Michigan transfer James Hudson sat last season but will be at left tackle this year. Darius Harper saw regular action in 2019 and will be on the opposite side of Hudson at right tackle. Center Jakari Robinson and guard Vincent McConnell are returning starters.

Plenty Of Experience On Defensive Side

Defensive coordinator Marcus Freeman has most of his unit back, and the Bearcats could be a nice ‘under’ play early coupled with an offense searching to find the rights fits in the backfield and at wide receiver. Cincinnati’s defense ranked 24th in the country allowing 20.6 PPG, and helped bettors playing the short side of totals on college football odds boards to 11 winning tickets in their 14 games.

The Bearcats are deep at the end with Myjai Sanders and Michael Pitts, plus Malik Vann will get plenty of opportunities again. Anchoring the interior is All-AAC tackle Elijah Ponder, with plenty of beef to back him up. The biggest losses on defense came at linebacker, where Joel Dublanko gets the first crack in the middle while former UConn transfer Darrian Beavers and Jarell White are outside.

Safety Darrick Forrest, another All-AAC honoree, returns as does James Wiggins who missed 2019 with a knee injury. Ahmad Gardner was on freshman All-American teams and returns as the shut-down corner, teaming with Coby Bryant and Arquon Bush to complete what could be one of the best defensive backfields in the country.

Week 4 Trip To Lincoln Will Set Tone For AAC Schedule

The goal is actually simple for Cincinnati: get in position to claim a New Year’s Six invite, which means the Bearcats can’t turn in another performance like the 42-0 whitewashing they suffered at Ohio State. The Buckeyes almost tripled-up the 14½-point spread and Cincinnati’s test this year is a Week 4 trip to Nebraska. The Bearcats have to at least look respectable.

The other two losses last year came at Memphis, first in the final game of the regular season and then again in the AAC Championship a week later. Cincinnati covered the college football odds in both games, but that was little consolation. The Bearcats host Memphis on Halloween this time and have a huge game at UCF three weeks later before closing at Temple.

Let’s face it, the AAC sort of sits in no man’s land between the Power 5 and Group of 5, not good enough to have a seat at the table with the adults but also without a place at the kids’ table. No, the notion of a national title is absurd, regardless of the 150/1 payoff at DraftKings, and the safer bet here is ‘over’ 8½ wins.