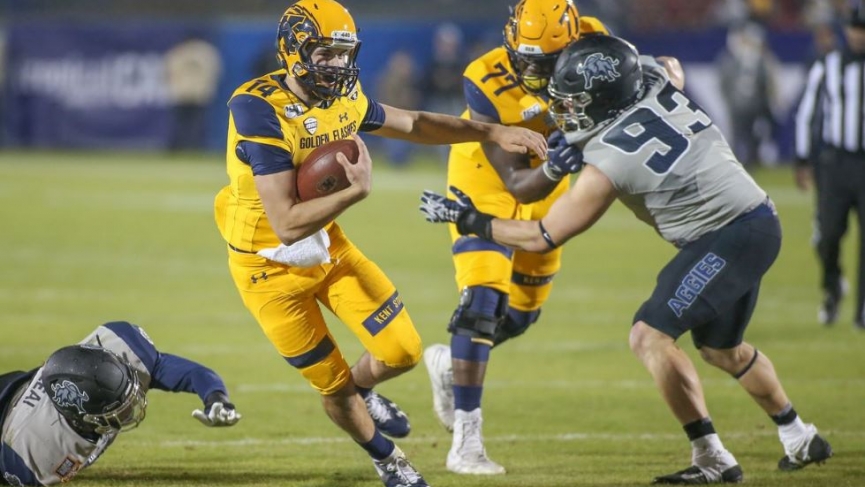 Akron vs Kent State Odds – College Football Week 12: Kent State hosts Akron on Tuesday night on their home turf, riding a 6-1 ATS streak on their last 7 games overall. Meanwhile, the Akron Zips come to down on a 2-5 ATS skid in their last 7 road games and are 7-20 ATS overall, a streak going back to 2018.

Kent State has gone 2-0 as a favorite so far this season, beating Bowling Green last week handily as a -1250 moneyline favorite, and picking up the 27-23 win over Eastern Michigan as the -210 chalk in their opening game of the season, a game in which they failed to cover the spread, as they sit 1-1 ATS coming into their game against the Zips.

Similar to the Buffalo/Bowling Green game, the line seems to be shaded a little bit further towards the favorite than it should be, and unlike the Buffalo game, money has come in on the favorite, moving Kent State from -24 to -25.

Based on the expectations, this is a very hard game to pick. The market may be biased towards Akron because of their performance against Ohio, covering the spread by 13.5 points in a game they were +27.5 point dogs. Nonetheless, this is an Akron team that has failed to cover in 8 of their last 10 games overall going back to last season. The truth of the matter is that they just simply aren’t that good, and Kent State should be able to roll through them rather easily.

If you’re backing Kent State, you should jump on them right away to take advantage of that potential recency bias attached to the Zips, who are coming off of a rare ATS cover. With just two games worth of data, it’s hard to pinpoint exactly where these teams stand as far as power-ratings go, so it’s more or less a stay away.